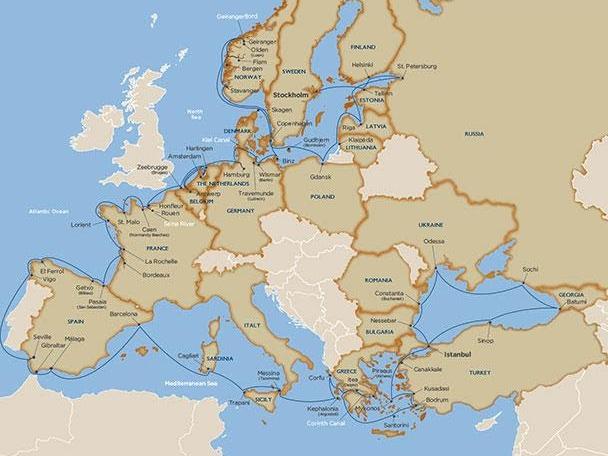 Windstar Cruises announced a sale on its new 79-day Grand European Bucket List Adventure, the longest itinerary ever offered by the small ship cruise line, along with new cruise adventures scheduled through 2023. The itineraries have been released online and in a new Voyage Collection brochure.

The Grand European cruise departs Stockholm on July 25, 2023 and takes guests on a new voyage spanning 22 countries through the Baltic, Northern Atlantic, Mediterranean and Black Sea. With 71 days in port (and only eight at sea), the itinerary has just the right amount of rest and relaxation onboard as well as new discoveries and explorations. There are also 11 overnights in port, giving guests a chance to dine and sample the nightlife in destinations like Bordeaux, Seville, Amsterdam, and Copenhagen.

Along with an exploration of Germany (a new Windstar offering), there are two first-time Windstar ports in Hamburg and Binz, in addition to a new Norwegian port of Arendal. The cruise finishes on Oct. 12 in Istanbul, Turkey and takes place aboard Windstar’s all-suite Star Legend yacht carrying only 312 guests. The yacht is small enough to navigate through the tight Kiel and Corinth Canals on this special sailing.

The Grand European cruise along with other grand sailings like Windstar’s 60-day Grand South Pacific and 56-day Grand Caribbean Adventure are part of a growing trend of longer voyages and world cruises. Windstar has been seeing a record-breaking number of reservations for its cruises and expects immediate sales of the newly announced itineraries now listed online and in the print brochure.

“We’re attributing our bookings to a pent-up demand for travel after most of the world has been sequestered for a year,” says Windstar President Christopher Prelog. “It’s creating a swift recovery for us, so much so that my advice is to book early as increased demand is real.”

The cruises in the 2021-2023 voyage collection include new regions like Australia and New Zealand (from remote islands to the Great Barrier Reef); rural Black Sea villages and Turkey, from Istanbul to Cappadocia, as well as the Holy Lands. There are also additional cruise-tours with new land-and-cruise options giving guests the chance to venture into Petra at dawn; sample fine port amid the terraced vineyards of Portugal’s Douro Valley; tour Italy’s Lake Como and the historic village of Bellagio by private boat; or view Iceland’s geysers and waterfalls.

The brochure also outlines and details the differences among Windstar’s six-yacht fleet – explaining the romance of the three classic Wind Class sailing yachts as well as the newly transformed all-suite Star Plus Class yachts. Those interested in requesting a copy or viewing a digital version can click on www.windstarcruises.com/request-a-brochure/. New itineraries and other details can be found at www.windstarcruises.com.