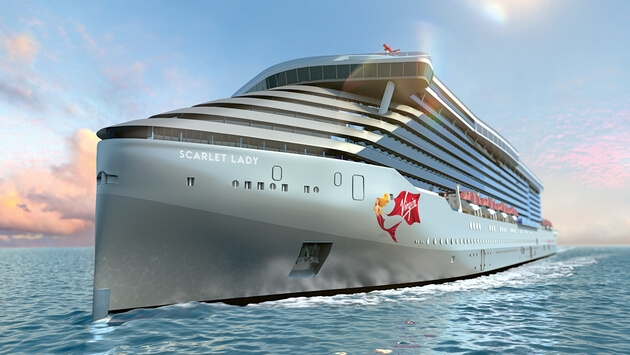 Virgin Voyages celebrated construction milestones on their first ship July 20 at the Fincantieri shipyard in Italy, taking the opportunity to make several announcements.

The day began with the flooding of the first ship’s dry dock, as the construction crew prepared to connect the two hull sections. The day also featured a ceremony to cut the first pieces of steel for Virgin Voyages’ as-yet-unnamed second ship, which is due for delivery in 2021.

Sir Richard Branson revealed that the ship’s name will be Scarlet Lady, a name that appeared on the second Virgin Atlantic plane. In addition, the line announced the “Scarlet Squad” program, which is designed to recruit and mentor female talent on ships as well as to create opportunities for women in more traditionally male roles onboard, including marine, technical, and hotel management.

The line also announced their intentions to ban single-use plastics (which includes straws, water bottles, shopping bags, condiment packets, and takeout coffee cups) and to instead offer complimentary still and sparkling water in restaurants and to provide water bottle filling stations throughout the ship.

In addition, more renderings were revealed today that build on what was offered in June, including of the gym and spa spaces. Particularly interesting is the first outdoor boxing ring at sea, which will be used for a variety of complimentary boxing-related fitness classes. All of the spaces have a sleek, chic look that feels modern and edgy, and occasionally playful.

Virgin Voyages declined to reveal information about their target clientele – who they call “sailors.” “Our cruisers are young at heart,” CEO Tom McAlpin said.

Branson, who danced on the table during lunch at the shipyard, added that the tables on the ship are being built for just such activities.

The line also has not laid out plans for how they will work with agents. Scarlet Lady sailings will go on sale at the end of the year.