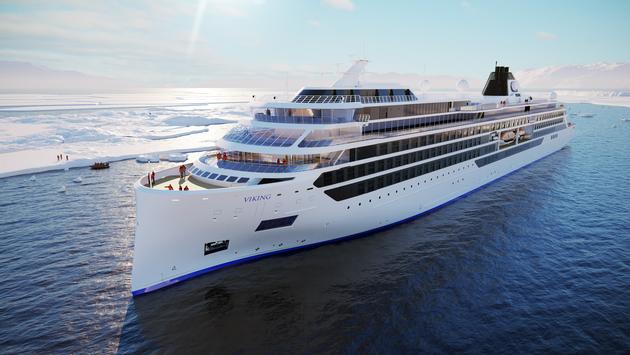 Viking, which began as a European river cruise operator and then expanded onto the oceans, is about to branch out even further.

So far this year, the company has announced plans to launch a new expedition division and a U.S. river operation on the Mississippi River.

The expedition division, announced in mid-January, would start cruising in January 2022 with the 378-passenger Viking Octantis in Antarctica and North America’s Great Lakes. A sister ship, Viking Polaris, is scheduled to join the fleet in August 2022 and operate in the Arctic and Antarctica.

The 30,150-gross-ton ships will be long and narrow—allowing them to sail through the Welland Canal that connects Lakes Ontario and Erie around Niagara Falls—yet big enough to provide stability in rough polar seas.

Viking Chairman Tor Hagen said the Great Lakes will appeal to many of the company’s past guests; about 88 percent are from North America and some may be “reluctant to travel long distances.”

The program will include eight- to 13-night voyages between Milwaukee, Wis., and Thunder Bay, Ontario; Toronto and Milwaukee; and New York and Toronto. The inaugural Antarctic season of six departures sold out in a few months.

Then, on March 30, Viking revealed plans to enter the Mississippi River market with the 386-passenger Viking Mississippi in August 2022. It will sail on voyages on the Lower and Upper Mississippi between New Orleans and St. Paul.

Under construction in Louisiana, the ship will have 193 all outside staterooms, a modern Scandinavian design, an infinity plunge pool and several restaurants.

Cruise fares will include one complimentary shore excursion in each port of call; all onboard meals; beer and wine with lunch and dinner; lectures; complimentary alternative dining; and free Wi-Fi. While bookings opened early for past Viking guests, reservations were set to open for everyone on April 15, 2020.

Some features on Viking Mississippi will be familiar to those who have sailed on the company’s ocean voyages—such as the infinity plunge pool and a two-story Explorers’ Lounge.

Viking’s clientele is very loyal to the company, so these new products will give your customers even more places to travel. Plus, the company’s popular TV commercials continue to attract new clients.

Active and adventurous clients of all ages will be attracted to the new expedition voyages, while those who prefer not to fly overseas or want to see more of the U.S. will appreciate the Great Lakes and Mississippi River products.

Over the past eight years, Viking has introduced more than 60 new river cruise ships and six ocean cruise vessels.

“We began as Viking River Cruises; then we evolved into Viking Cruises with the addition of ocean cruises,” said Viking Chairman Tor Hagen. “Today we stand singularly as Viking, offering destination-focused voyages on more than 20 rivers, five oceans and five Great Lakes, visiting 403 ports in 95 countries and on all seven continents.”