The Vaccine Passport Debate Is Here 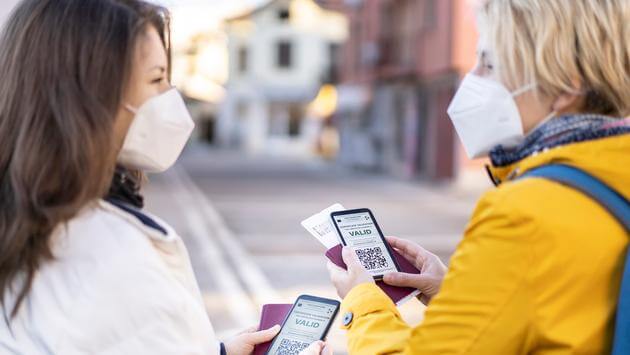 Vaccines are here and that means we can travel again, right? Not so fast.

While the rollout seems to be going fairly smoothly, more Americans are getting shots everyday and lockdowns around the country are being lifted, the world of travel hasn’t exactly jumped back on its feet.

While vaccines are creating a surge in interest in vacations, it’s unclear what a full return to normal will look like. One phrase does keep popping up, however: “vaccine passports.”

There was a lot of buzz about apps that would track your health status for reopening travel in the fall. Then the surge came and health apps took a backseat to newly reimposed travel restrictions.

Now that the U.S. has three vaccines approved by the FDA for emergency use and states are rolling them out to more and more people, an increase in interest among vaccinated travelers is bubbling to the surface.

However, travel may not return uninhibited.

Several countries, destinations, cruise lines and tour operators have insisted guests be vaccinated before entering their borders or traveling with them.

This means that we are entering a new era that could mean providing proof of health status and vaccinations.

Currently, vaccinated Americans receive a vaccine card listing the doses and dates they received them. These cards are like the golden ticket, potentially opening the doors of the world to those who possess them. However, they are at best, just small slips of paper that can easily be faked. How will tourism officials be able to prove that these cards are legitimate?

They are also small cards that could easily be misplaced, stolen or lost. Where will travelers store their vaccine and COVID-19 health records safely and securely?

Vaccine passports may be the answer. A number of companies are rolling out apps for use on mobile devices that electronically store vaccine and health records. Some airlines already accept the information stored on these apps.

In an exclusive interview airing tonight on NBC Nightly News, Delta CEO Ed Bastian tells NBC News’ Lester Holt that he anticipates some type of vaccine passport for overseas flights will be required.

“I don’t see that happening in the U.S., but I think internationally that’s probably going to be a requirement,” said Bastian.

Possibly the most widely used in the U.S. is CommonPass, which was developed in partnership with the World Economic Forum.

Also in development is the International Air Transport Association, the IATA Travel Pass, which is scheduled to be released for Apple iOS users soon and will then be followed by an Android app.

An IBM Digital Health Pass is also in the works that is more focused on getting employees back to the workplace but could also be used in travel and for meetings and other group functions.

Currently, none of these passport apps are in wide use.

In addition to privately developed apps, several countries are introducing their own.

Malaysia has an Immunitee Health Passport, and the European Union is developing a Digital Green Pass to provide proof that a person is vaccinated, results of tests for those who couldn’t be vaccinated and information on COVID-19 recovery for those who have contracted the virus.

All have a focus on keeping health information private while accessible.https://platform.twitter.com/embed/Tweet.html?dnt=false&embedId=twitter-widget-0&frame=false&hideCard=false&hideThread=false&id=1366346729289904128&lang=en&origin=https%3A%2F%2Fwww.travelpulse.com%2Fnews%2Ffeatures%2Fthe-vaccine-passport-debate-is-here.html&siteScreenName=TravelPulse&theme=light&widgetsVersion=e1ffbdb%3A1614796141937&width=550px

Other countries, including Iceland, Poland, Portugal and Cyprus have plans for proof-of-vaccination certificates for their citizens.

In the U.S., Andy Slavitt, White House senior adviser for COVID-19 response, said, “It’s not the role of the government to hold that data and to do that.”

He also noted that health data should be private, secure, free, open source, in multiple languages and with both hard copies and digital ones available.

Despite the goal of privacy, the decision to enlist vaccine passports or for people to carry and be requested to show health information as a condition for doing things such as travel, going to the movies, dining out, etcetera is controversial.

The World Health Organization points to vaccine requirements as discriminatory based on inequities in the availability of the vaccine and due to scientific considerations as to whether or not the vaccines actually prevent disease and transmission, according to a February White Paper.