The next cruising hot spot is closer than you think: Get ready for more ships on the Great Lakes 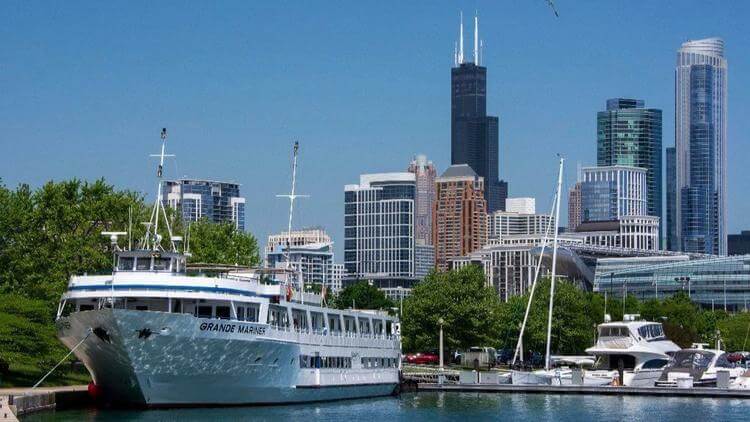 When it comes to hot new cruise destinations, the Great Lakes are living up to their name.

This veritable freshwater ocean — boasting 11,000 miles of shoreline, including islands — is attracting a lot of attention lately from cruise ship companies wanting alternatives for passengers who may be tired of pingponging around the Caribbean or who loathe to make a long flight across the ocean for a European voyage.

Great Lakes cruise operators are bulking up their brochures with additional trips this season, and lines that bailed on the area years ago are headed back. Industry experts expect companies that have never plied Great Lakes waters to come on board in the near future.

“The best thing about it is that these are not 4,000-passenger ships that destroy the experience for people who live there,” said Lorenz, vice president of Travel Michigan, the state’s tourism arm. “You look at places like Venice or Barcelona, and they’re actively fighting to keep out the huge cruise ships. In our case, you’re talking a couple hundred people per ship. They get to see this is a pretty stunningly beautiful area, and it opens the door for them to come back later on.”
The Grande Mariner docked at Mackinac Island, with the historic Fort Mackinac in the distance. Mackinac Island is a popular port of call on Great Lakes cruises. (Blount Small Ship Adventures)

Ships, of course, are no strangers to this charm bracelet of five inland seas, a gift from the glaciers that, when measured by total area, make up the world’s largest source of fresh surface water. Mark Twain and Charles Dickens both wrote glowingly of their 19th century Great Lakes voyages, a form of transportation that eventually gave way to automobiles and airplanes.

“There was a pretty good industry in the ’30s, ’40s and ’50s, and then it just vanished,” said Chris Conlin, president of Great Lakes Cruise Co., Michigan-based travel advisers who charter ships for Great Lakes trips. “We started back in the late ’90s, during a rebirth of passenger cruising on the Great Lakes.”

Most of Conlin’s clientele hails from the Sun Belt.

“They look at the Great Lakes almost as a foreign destination,” he said, noting that the sentiment is accurate, given the shared shoreline with Canada.

Great Lakes trips hold a special appeal to Midwesterners too. Getting to and from the ship is quick and easy. And even though the area might be right out the back door, it’s big and varied enough to pack plenty of surprises.

“Many people in the Midwest have never heard of Georgian Bay, for example,” Conlin said, referring to Ontario’s massive aquatic playground off Lake Huron. “It could be a sixth Great Lake all to itself. The sailing is spectacular up there.”

One segment of the market that Conlin doesn’t see much of on Great Lakes cruises: families with young kids.

“The ships are small; they have to be to get through the locks, so there aren’t a lot of onboard activities for children,” he said. “This is more of an educational, experiential trip than it is fun-in-the-sun.”

Passengers must be at least 14 years old to cruise with Blount Small Ship Adventures, whose two sister ships — the Grande Caribe and Grande Mariner — hold 84 passengers each on BYOB voyages.

It added a new trip this season that sails from Chicago to Montreal, hitting four Great Lakes over 14 days on the water. Prices start at $4,599 per person.

“We made the choice to add more departures on the Great Lakes because we’ve seen an influx of interest,” said Blount marketing manager Kayla Setters. “People are looking to cruise closer to home.”

One of the leaders in U.S. river cruising, American Queen Steamboat Co. (AQSC) recently bought Victory Cruise Lines, which had been operating two ships, Victory I and II, in the Great Lakes.

“Our guests are very loyal to our products,” said AQSC Chairman and CEO John Waggoner. “They were looking for other itineraries. By us buying the Victory I and Victory II, not only did it give us the Great Lakes itineraries, but it also gives us the Eastern Seaboard and other choices.”

Victory I, shown here in Detroit, is one of two ships that had been cruising the Great Lakes for Victory Cruise Lines, recently purchased by American Queen Steamboat Company. AQSC is remodeling both ships for the upcoming season. (Victory Cruise Lines)

AQSC remodeled the 202-passenger Victory ships and will kick off the upcoming season in May with a 10-day sailing between Toronto and Chicago — its most popular Great Lakes trip, typically priced at $6,389 a person.

Waggoner looks at cruising the Great Lakes as a cross between river and ocean voyages.

“With river cruising, you see the banks at all times,” he said. “On the Great Lakes, you do get out of the sight of land. But it’s different from ocean cruising because you’re still in protected waters and get to be fairly close to shore.”

It too is in expansion mode. Plans call for a couple of additional vessels over the next two years.

The 210-passenger Pearl Mist in Muskegon, Mich., one of the spots visited on Pearl Seas Cruises’ Great Lakes voyages. Cruise ships from three lines are scheduled to dock in Muskegon this season. (Eagle Eye Photography)

“One of the new ships will go to the Great Lakes, so we’ll have two ships there before too long,” CEO Charles A. Robertson said.

After more than a decade since it last sailed the Great Lakes, the French luxury cruise line Ponant is making its return this season with a few trips aboard Le Champlain, an elegant new ship with 92 staterooms and suites.

Next year, German-based Hapag-Lloyd Cruises will be back with a 14-day cruise on all five Great Lakes aboard its freshly minted luxury expedition vessel, Hanseatic Inspiration, built with a retractable bridge wing that makes it possible to pass through narrow locks.

The French luxury cruise line Ponant will make its return to the Great Lakes this season with a few trips aboard Le Champlain, seen here last year while cruising in Norway. (Ponant)

The soon-to-launch Ritz-Carlton Yacht Collection, which will start cruising in early 2020, has plans to eventually expand its fleet into the St. Lawrence Seaway and Great Lakes area.

“Guests will also have the opportunity to enrich their voyage experience with unique programming at nearby Ritz-Carlton properties in Toronto and Chicago,” a spokeswoman said.

Rumors have been floating that Viking Cruises — a huge player in Europe — may be headed this way. A Viking spokesman was mum on the matter.

The Canada-based Great Lakes Cruising Coalition has spent more than two decades advocating passenger cruising on the Great Lakes. Stephen Burnett, who heads the organization, said that work is paying off. He’s in talks with cruise lines in Israel, Greece, France, Norway and Monaco about branching out into the Great Lakes.

“We’re on a bit of a roll at the moment,” Burnett said, adding that the perceived safety of traveling on the Great Lakes makes it especially appealing to cruisers and cruise lines alike.

“But the main reason they’re coming is the product — the lakes themselves, the itineraries,” he said. “They’re outstanding.”