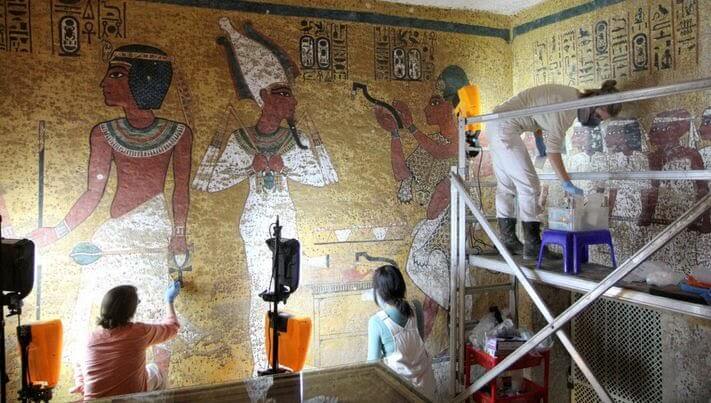 Exploring the world for 3 decades and counting

For anyone looking for a blue-chip luxury travel company that offers small escorted tours to Europe, Africa, Asia or even the American West, the name Tauck is often the one that travel advisors suggest.

Tauck is widely considered the gold standard of escorted tours and offers guided land tours on six continents. They pioneered river cruising in Europe way back in 1993. The have small ship cruises and family trips. They have an exclusive partnership with Emmy-Award winning filmmaker Ken Burns. Their core market is energetic, well-heeled, curious and sophisticated 60-somethings with a yen for experiences. Accommodations are typically in five-star hotels.

Wildebeest migration on safari with Tauck in Tanzania TAUCK

Yet Tauck tends to run quietly under the radar. While they’ve made Travel + Leisure’s World’s Best list for 20 years, they’re not exactly shouting about it.  More than half their clients are repeat guests, year after year. Another 30 percent of their guests come to them via word of mouth. It’s a reputation-based company that rarely advertises, with something of a club-like atmosphere surrounding it.  When they announce a new tour, it sells out quickly.

The nearly 95-year-old Wilton, Connecticut company was started by Arthur Tauck Sr., the 27-year-old son of a German immigrant. His Tauck Motor Tours began with a tour through New England in 1925. The company has evolved into a global travel company, with the fourth generation of Taucks now involved. It’s a family-owned company with values that some might see as a tad old fashioned. That’s not necessarily a bad thing.

“From a vision standpoint, we have an incredible sense of purpose for changing peoples’ lives through travel,” said Jennifer Tombaugh, President of Tauck, when I spoke with her recently. “It’s not lip service. If you walk down the halls and speak with the 350 people who work here, that message resonates. It’s the same with our 350 Tour Directors.”

Tombaugh, who is the first non-family member to hold the title of President, is energetic and passionate about the Tauck style of travel, a Harvard MBA who joined the company in 2001.

“We’re unified by a sense of purpose,” she says. “It’s still family-owned and we value doing what’s right by the guest. We strive to innovate and move forward and these are all values that Arthur Tauck, Jr., the 87-year-old son of the founder, still espouses and passes on.”

During Tombaugh’s time at the company, the innovation has included a groundbreaking partnership in 2009 with filmmaker Ken Burns and his writing partner Dayton Duncan. The partnership includes events, at which one of them may speak. Then there are Stories by Ken Burns, which includes more than 100 original filmed vignettes that are played during given tours. There are also Crafted by Tauck and Ken Burns, original tours such as Wonderland: Winter in Yellowstone.

“Guests choose us because we have access to unique experiences that we can provide that they can’t easily do on their own,” says Tombaugh. Those experiences can include a private evening in Tuscany with Frances Mayes, author of Under the Tuscan Sun; a private dinner in Stockholm’s Vasa Museum; or a private floatplane flightseeing cruise over Denali National Park.

But as Tombaugh points out, while guests book because of the destination, after the trip it’s the people they remember best. Some of those people are the Tauck Directors, all 350 of them, whom Tombaugh describes as “energetic and passionate people who act as choreographers, concierges and problem solvers. Some are retired PhD’s, others are on their second careers, and some speak seven languages. Many of them have incredible athletic or academic accomplishments and they have an average tenure with us of 10 years. They’re instrumental to the experience that we deliver.”

Wall paintings conservation work being conducted in the burial chamber of Tutankhamun’s tomb in the spring 2016. TAUCK

In 2020, Tauck is returning to Egypt and also doing an Egypt/ Jordan trip. Both are highlighted by a Tauck-exclusive, an after-hours, private tour of the Valley of the Kings that includes a private visit to the legendary tomb of King Tutankhamun. Tauck is introducing three Douro cruises, their first ever on the river, on the brand new 84 passenger riverboat MS Andorinha. There is Heli-Exploring in the Bugaboos of Canada; The Ultimate Alps & Dolomites: Essence of Japan: and New Zealand: A North & South Island Adventure.