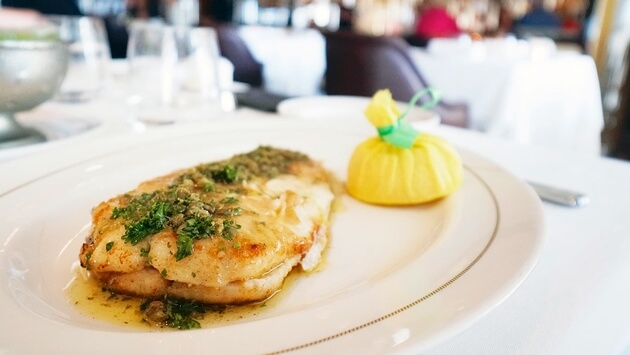 Seabourn set a new standard in dining when it teamed up with acclaimed chef and restaurateur Thomas Keller. Keller is the culinary icon behind three Michelin-starred restaurants: The French Laundry, Per Se and Bouchon.

As proprietor of the Thomas Keller Restaurant Group, he oversees an empire of 12 restaurants and bakeries. And, since 2015, Keller’s distinctive brand of American and French cuisine has also enhanced Seabourn’s culinary offerings.

It’s a partnership based on a shared vision.

“There is really no chef more accomplished or held in higher esteem than Chef Keller, and we are both honored and delighted to have a restaurateur of his stature take our onboard culinary offerings to an even higher level. His culinary talent and sophisticated cuisine are beyond compare and the perfect match for our guests,” said Seabourn president Richard Meadows.

For his part, Keller cites a shared mindset with the line.

“When I think about Seabourn and the Thomas Keller Restaurant Group I think there’s a natural alignment there. It’s based on our values, based on our commitment, based on our philosophies, based on our cultures, and it allows us to work together to give our guests a better experience,” said Keller.

That guest experience has evolved in the past few years.

Initially, Keller developed an array of dishes for dining venues aboard Seabourn Odyssey, Seabourn Sojourn and Seabourn Quest. He then collaborated with Seabourn to introduce a new signature restaurant, The Grill by Thomas Keller. Unveiled in the spring of 2016 aboard Seabourn Quest, it has since rolled out fleet wide.

“We’re not a ship restaurant. We’re a restaurant on a ship,” said Keller.

And, The Grill is quite a restaurant. Serving chophouse classics with a modern (and French) twist, popular starters include Caesar salad, Lobster Thermador and crab cakes with aioli dressing. Naturally-fed veal T-bone, medallions of Elysian Fields Farm lamb and Snake River Farms Beef Rib Eye are decadent entrée courses. And, ice cream sundaes, like several other dishes, are prepared tableside.

At Keller’s insistence, the culinary staff at The Grill is trained by the Thomas Keller Restaurant Group. Even more amazing is the provisioning for The Grill. The exact same ingredients used at Keller’s land-based restaurants are used on the ships. That means the Vermont butter on the table is the same as the one in Keller’s Michelin-starred eateries on land.

Of course, Keller’s restaurants on land are notoriously hard to get in to. But, not so aboard the Seabourn fleet. All passengers can dine at The Grill, for no extra fee. Reservations are required, however.