Scenic Eclipse invites guests to ‘live like a billionaire’ 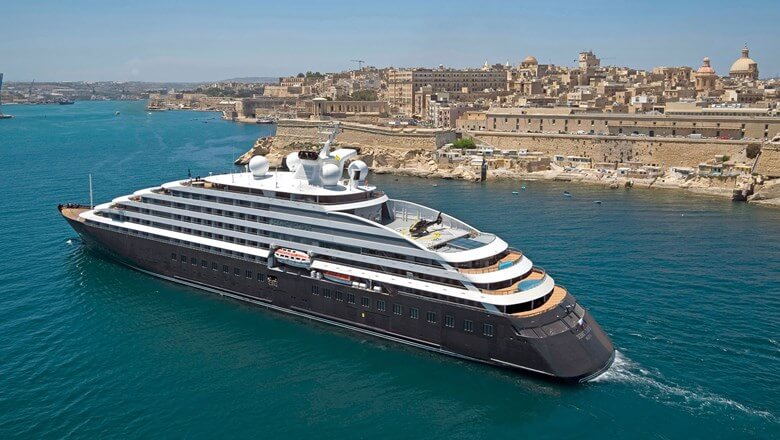 The Scenic Eclipse in Malta, with its black chopper on the stern’s top deck.

ONBOARD THE SCENIC ECLIPSE — When Scenic announced plans for this ship back in 2016, it immediately prompted a wave of interest. A line well-known in river cruising would launch a super-luxe expedition ship with an onboard helicopter and submarine, two amenities not typical for expedition ship offerings.

Unfortunately, the ship’s yearlong delay due to problems at the Croatian shipyard where it was built became its bigger story over the last year.

But upon seeing the vessel as it approached the Manhattan Cruise Terminal last week in New York, I was reminded why the Eclipse is in a class by itself. Even my taxi driver rubbernecked to see the black, shiny chopper atop the ship’s stern, punctuating its black hull.

There are not one but two Airbus H130 helicopters on the Eclipse, and its submarine can reach depths of nearly 1,000 feet. All have room for six guests.

With toys like these, Eclipse passengers will be able to “live like a billionaire,” in the words of Scenic founder Glen Moroney. He wants his well-heeled but not-quite-billionaire clientele to be able to sail on a yacht as if they were, his inspiration being actual mega-yachts docked in Sydney Harbor.

But Moroney stressed that what really sets the experience apart are the discoveries that the ship enables.

The chopper and sub are not just super-cool toys; they also enable passengers to dive into parts of the ocean where submarines have never gone before and take flights over areas of the Arctic or Antarctica far beyond where ships can anchor.

On the ship’s inaugural cruise to Iceland and Greenland, the sub dove down a sea wall to see coral sponges and anemones, while the helicopter flew over ice caps and glaciers. On my itinerary, the sub was to take passengers down about 95 feet to see a sunken ship off the coast of Nova Scotia.

In many ways, guests onboard will feel as if this is a yacht of their own — along with the couple hundred strangers also onboard. Aside from the helicopter, the submarine and spa treatments, there’s not much that’s not included in the fare.

The Yacht Club on the Scenic Eclipse is both a casual indoor-outdoor eatery and the site of the main pool. Photo Credit: Johanna Jainchill

All shore excursions are complimentary — and not just the single highlights tour that some lines offer. On last week’s call in Martha’s Vineyard, there were four options, including a visit and tasting at an oyster farm and an African American heritage tour. The variety of excursions elsewhere includes everything from guided kayaking and cooking classes to a private showing of an equestrian ballet in Spain.

A fleet of e-bikes will soon be available to passengers. There is a water platform with various water toys as well as snowshoes for walking in the polar regions.

All of the nine dining options onboard are included, far more options than are normally found on an expedition vessel. Three are part of a Japanese wing with a sushi bar, teppanyaki room and Asian fusion eatery.

The Eclipse designers wanted the ship to have several open galleys, which they have in Elements, the Italian, steak and seafood eatery, and in Lumiere, the stylish French restaurant that serves a contemporary seven-course menu and has a Champagne bar. Its entry is adorned by a sculpture made with 5,400 spoons.

The most sought-after onboard dining experience is the intimate Chef’s Table experience. The 10-person meal is served at various times throughout the cruise, but dining is by invitation only, following a list that starts with guests in the Owners Suites and works its way down.

Almost all wines or spirits are included, even the most top-shelf of the 100 whiskeys on display at the Whiskey Bar.

Enrichment is a big part of the onboard experience. On Day 1, the ship introduced its staff of onboard “experts”: an archaeologist, an anthropologist, a geologist, a marine biologist and a seabird expert who throughout the sailing would be educating guests on excursions and during lectures in the ship’s theater.

On my sailing, the theater, an in-the-round venue with wide, reclining leather seats, also showed movies and hosted a trivia night.

The observation lounge offers comfortable seating that looks out at the sea. Photo Credit: Johanna Jainchill

The ship’s design was overseen by Moroney’s wife, Karen, who according to one crewmember was involved to the point of sitting in every chair that came onboard and sleeping in the sheets and on the mattresses before settling on her selections.

Even the smallest cabin on the Eclipse, 345 square feet, is spacious, and all have separate sitting areas as well as sizable balconies, perfect for enjoying the 24-hour room service. Rooms feature high-end amenities like Illy espresso machines and beds that can be separately adjusted on each side.

In the highest cabin categories, the ship’s spa suites have full-size soaking tubs with ocean views, while the largest suites onboard, the two 2,099-square-foot owners penthouse suites, have enough space for occupants to entertain both indoors and on the 646-square-foot terrace that features a Jacuzzi and offers some of the best onboard nature views in the polar zones.

The ship’s observation lounge has comfortable seating that looks out at the sea, although the view is much better if you go outside onto the observation deck.

The Yacht Club is both a casual indoor/outdoor eatery and the site of the main pool. The two experiences have been intertwined to the point of a glass shower being right next to a dining table. The al fresco dining area also offers one of two plunge pools.

The main gathering areas are the Lounge, which triples as the front desk; the Whiskey Bar; and a large sitting area with nightly live music.