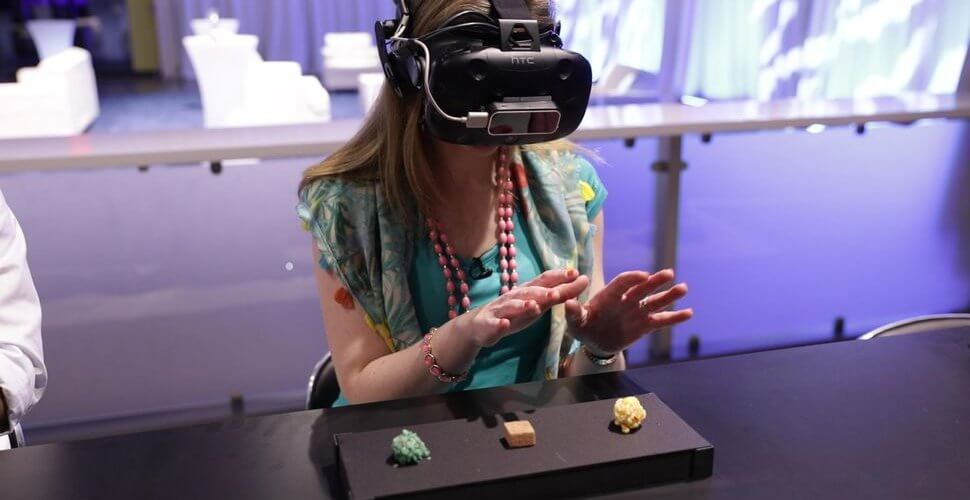 Self-driving shuttles. Servers who’ll find you anywhere to give you a drink. The future of ocean cruises will require even less effort from you.

The paper screen doors of the Japanese tea house in front of me shatter, the pieces folding into paper cranes that fly away, exposing an ornate garden and stream.

All because I popped a glowing blue orb into my mouth.

I taste an (actual) crispy tuna tartare bite. Another orb appears and as I begin to chew, the scenery goes from winter to spring.

A final, green orb appears — really a chocolate truffle covered in pop rocks — and the light dims as the garden setting shifts to nighttime.

My mouth still tingles with pop rocks as I remove my HTC Vive virtual realityheadset. All of a sudden, I’m back in a pop-up Japanese bar-style restaurant set up in a Brooklyn warehouse by Royal Caribbean.

That VR snack was just one concept that Royal Caribbean showed off Wednesday as it presented its vision of what’s in store for cruise ships. The company touted the stateroom of the future, facial recognition systems and self-driving shuttles — all illustrations of the ways it plans to make the cruising experience easier. Or, if you really take advantage of some of these innovations, how it plans to help you be as lazy as you want to be. (Yes, we’re inching ever closer to that space cruise liner in Wall-E.)

Miami-based Royal Caribbean is the latest cruise company to make noise about its embrace of technology. Rival cruise operator Carnival plans to roll out wearable high-tech medallions to its guests to help personalize their services, MSC is integrating VR experiences of its own and Norwegian Cruise Line is hinting at innovations to come.

Royal Caribbean has developed a healthy lead, however, with its introduction of robotic bartenders and Wi-Fi that doesn’t suck when you’re out at sea.

“They’ve really put themselves out there for years as an innovation and tech leader,” said Hannah Sampson, an editor at travel news site Skift.

These companies have realized that regardless of what business you’re in, whether it’s cruise ships or restaurants, you can’t ignore innovation.

“The truth is, tech is simply something people expect,” said Royal Caribbean CEO Richard Fain. “It’s not an option.”

Virtual reality dining isn’t a new phenomenon, though it’s never really taken off either. There are natural drawbacks: You’re largely stuck in your own virtual world, unable to really hold a conversation, you can’t see what you’re eating and you’ve got a clunky system resting on your head.

Royal Caribbean took some of those concerns into account with its own spin on VR dining. The experience is short, offering up flashy visuals timed to the three “courses,” or bite-sized appetizers, that show up in the VR world as colorful orbs.

The cruise company worked with tech partner X Studios to create the dining experience. The HTC Vive is paired with Leap Motion’s motion-tracking tech to give you virtual hands you can see and control as if they’re your own. That enables you to pick up each dish.

This is, admittedly, a novelty. Even Joey Hasty, head of innovation and transformation at Royal Caribbean, said this wouldn’t work for a four-course meal, but he teased that it could work at a dessert bar.

“We believe dining is actually better in VR because it’s possible for one sense to hijack another,” he said.

Royal Caribbean wouldn’t say when VR dining would appear on ships. David Morales, co-founder of X Studios, said the intent was to explore the possibility.

Another tech skill Royal Caribbean demonstrated Wednesday was the ability to order a drink from an app and have a waiter appear with it, no matter where you are.

The company plans to use the Wi-Fi access points on its ships to triangulate your location, giving servers an area of about 3 meters to walk toward. Servers are equipped with a phone that flashes a photo of your face, helping them to track you down.

My colleagues Bridget Carey and Mark Licea ordered two “basil smashes,” and despite their moving around, a waiter promptly found them both.

If this works, you can forget about giving up your precious sunbathing session to fight the crowds at a bar.

“It’s useful, and people will appreciate that,” Sampson said.

Stateroom of the future

Royal Caribbean’s concept for a stateroom may have you spending even more time in your cabin. The company outfitted the entire ceiling with an LED screen, as well as an LED “stream” that flows across the floor.

With a tap of a button on his phone, Hasty was able to change the setting to daytime, evening and even tropical rainforest. He said Royal Caribbean was exploring other settings, like Mars.

The intent of this design, however, is to better connect you with the sea, offering you simulated scenery of the waters outside. That’s particularly relevant if you have an inside cabin with no window.

“As these ships get bigger, you get pulled away from the ocean,” he said.

Walking is so yesterday.

Royal Caribbean is working with Navya to test a potential fleet of self-driving shuttles that would take guests from the port to some excursion or the main part of a resort.

The Navya shuttle, an egg-shaped vehicle capable of carrying 15 people, is already in operation at the University of Michigan. It also began service in Las Vegas, where it got into a minor accident on its first day.

Royal Caribbean plans to test the shuttle with its own employees first and then with customers down the line. At a lot of destinations, these shuttles would be the alternative to long walks from the port, Hasty said.

Facial recognition is all the rage, and Royal Caribbean is jumping aboard the technology as a way to speed up the check-in process.

As someone who spent nearly two hours dealing with security and waiting at a check-in desk for a Princess Cruise in September, I appreciated any way to make the process easier.

When I walked up to a camera, the display showed my face and name and automatically checked me in. The system recognized me because I’d sent a selfie to the company the day before. Once the system is in place, customers will be able to upload a photo for verification on embarkation day.

The first of these facial recognition systems will be in use at Port Everglades in Fort Lauderdale by the end of the year, according to the company.

“We’re trying,” Fain said, “to give you the first day of your vacation back.”