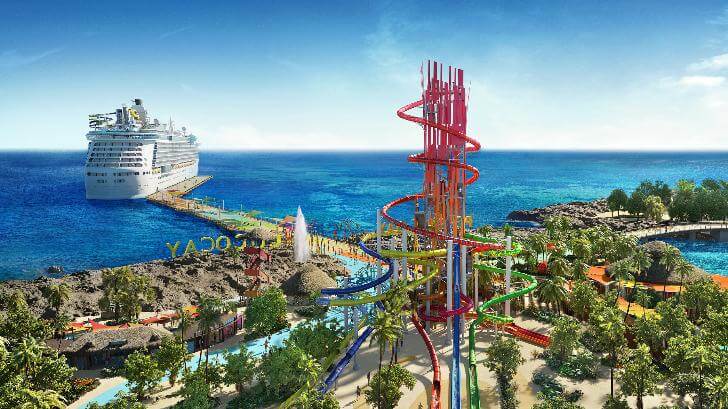 It already has some of the largest, most technologically advanced ships in the cruise fleet packed with activities and entertainment for guests. So what will Royal Caribbean International do next? The answer became apparent earlier this week when the mega-cruise line unveiled a series of initiatives that it hopes will solidify its market position as a leader in innovative cruise experiences.

Indeed, Royal Caribbean is launching a new effort to reimagine its private islands, completely renovate its older ships, and launch more ships in its top new classes, as well as introduce a whole new line of vessels.

First up, Royal Caribbean has begun a major multi-million-dollar refurbishment of its private islands, including Coco Cay in the Bahamas and Labadee in Haiti, and will build new private islands in the Caribbean and Pacific Asia. The goal is to provide the cruise line’s guests and the next generation of cruisers with the most advanced, customizable vacation experiences at sea, which the cruise line is dubbing the Perfect Day.

At a press and travel agent event on March 14 at Pier 17 in the South Street Seaport area of Manhattan, Royal Caribbean pulled out all the stops with a 360-degree presentation of its new programs by its top executives  and a virtual reality tour showcasing plans for its revamped Coco Cay private island. Every attendee was given an iPad so they could see virtual renderings of different regions of the island that were triggered at spots around a mock-up of the island.

Royal Caribbean will debut its new global private Island Collection at CocoCay in 2019. In one of the company’s most ambitious projects yet, the cruise line is changing what it means to “thrill and chill” on vacation with the unveiling of what it is calling the new Perfect Day Island Collection, a series of exclusive private island destinations around the world. The first in the collection, Perfect Day at CocoCay, is a $200 million transformation of the cruise line’s existing private island in the Bahamas that it says will now deliver the ultimate family destination in the Caribbean.

Highlights will include Thrill Waterpark, featuring two water towers with 13 slides —the most slides found in any waterpark in the Caribbean—and the 135-foot-tall Daredevil’s Peak, the tallest waterslide in North America. In addition, the waterpark will feature the Caribbean’s largest wave pool and a kid-friendly obstacle course pool.

Oasis Lagoon will debut as the Caribbean’s largest freshwater pool, with a swim-up bar and in-pool loungers. A 1,600-foot zip line will crisscross the island at up to 50 feet high and feature the only water landing in the Caribbean. A helium balloon, dubbed Up, Up and Away, will float up to 450 feet above the ground providing for the highest vantage point in the Bahamas.

Royal Caribbean ships departing from New York, Maryland and Florida will call at Perfect Day at CocoCay. The island transformation will roll out in phases beginning in September 2018 with the completion of a new pier, and by spring 2019 most of the island’s experiences will be open. Coco Beach Club, the final phase, is set to open in November 2019. Other Perfect Day Island Collection destinations in Asia, Australia and the Caribbean will be announced at a later date.

“We are introducing the Perfect Day Island Collection to deliver the most memorable vacation for adventure seekers on land and on board our ship,” said Michael Bayley, president and CEO of Royal Caribbean International. “Once completed, Perfect Day at CocoCay will be the ultimate family destination in the Caribbean.”

Spanning 10 ships in four years, the program will touch every facet of the guest experience, and introduce a wide range of innovative features and new experiences, including specialized pool spaces, experiential dining and nightlife concepts, and first-of-its-kind attractions like Sky Pad, a virtual reality, bungee trampoline experience.

Royal Caribbean’s increased popularity among millennials resulted in the cruise line being named “Cruise Line Brand of the Year” in the Harris Poll’s 29th annual EquiTrend Study. This important, rising generation of travelers opts for more frequent and often shorter vacations, and Royal Caribbean is answering that call by increasing the number of short Caribbean getaways that it offers.

In summer 2018, Mariner of the Seas will undergo a $90 million modernization adding new features, including Sky Pad and a glow-in-the-dark laser tag experience; The Bamboo Room, a retro lounge with tiki-chic décor; and the Playmakers Sports Bar & Arcade. Mariner will sail three- and four-night cruises from Miami.

Sister ship Navigator of the Seas will follow in 2019, and receive an even more extensive modernization before joining Mariner of the Seas to offer short cruises. In 2019, both ships will call on Perfect Day at CocoCay.

Beginning in April 2018, Royal Caribbean’s newest ship, Symphony of the Seas, will make waves not only as the world’s largest cruise ship but also as the ultimate family vacation. True to her name, Symphony brings together a variety of new features, including the Ultimate Family Suite; new dining options – from fresh seafood to Mexican, thrilling entertainment and live-action adventure, such as the epic glow-in-the-dark laser tag experience.

In addition to Symphony of the Seas, Royal Caribbean has a full lineup of new ships on the horizon, including the Quantum Ultra Class vessel Spectrum of the Seas, an evolution of the Quantum Class of ships, set to debut in 2019; a second Quantum Ultra Class ship in 2020, a fifth Oasis Class ship in 2021 and a new class known as Icon, with two ships expected to be delivered in 2022 and 2024, both which will be largely powered by liquefied natural gas (LNG) and fuel cells.