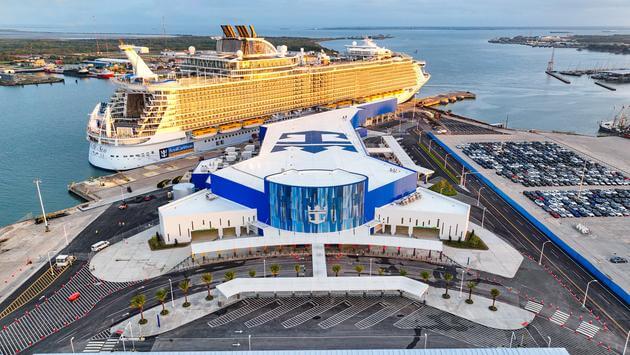 In addition to welcoming the largest cruise ship to ever serve Texas, Allure of the Seas, Royal Caribbean held a ribbon-cutting ceremony at the Port of Galveston to mark the state-of-the-art facility’s opening.

“We are thrilled to take family vacations to a whole new level in Texas,” Bayley said. “Our new, 161,334-square-foot terminal opens up a world of vacation possibilities for families in the Southwest.”

“Now our unmatched Oasis Class ships, known as the best family vacations in the industry, can set sail from Galveston,” Bayley continued. “Allure of the Seas is just the beginning, and we thank the Port of Galveston, Ceres and all the teams involved for making this bold vision a reality.”

With the introduction of the Oasis Class, the cruise line estimated that its new terminal would welcome as many as 630,000 passengers each year. The terminal is also the world’s first LEED Zero Energy facility, generating 100 percent of the energy it needs through onsite solar panels.

“This new cruise terminal is a gamechanger for the port and the region,” Rees said. “This $125 million investment, in collaboration with Royal Caribbean, the port and Ceres, is expected to bring 800 new jobs, $1.4 billion in local business services revenue, $5.6 million in state and local taxes, and incredible business development opportunities.”

Allure of the Seas will set sail from the new homeport on its first cruise on November 13 and offer seven-night Western Caribbean cruises from Galveston that visit destinations such as Costa Maya and Cozumel, Mexico; and Roatan, Honduras; for the winter 2022-2023 season.