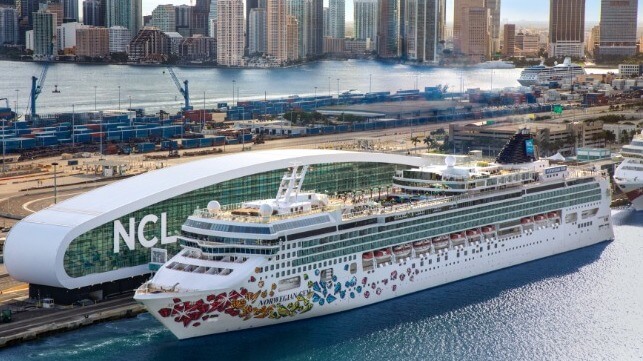 After winning an injunction against Florida’s government last week, Norwegian Cruise Line Holdings successfully launched the state’s first ever all-vaccinated cruise with a sailing of the Norwegian Gem from PortMiami. The vessel departed Sunday with a complement of 100-percent vaccinated passengers and crew, despite the State of Florida’s long-running attempt to ban the use of vaccine passports for screening.

In July, NCLH asked a federal court to block the ban so that it could move ahead with its sailings from Florida seaports with a 100 percent onboard vaccination rate. The line is employing this standard for all of its global operations, and it has promised that it will not sail from Florida if the state law remains in effect. In a ruling August 8, a federal judge agreed with the cruise line and issued a temporary injunction to suspend the state law, paving the way for Norwegian Gem’s inaugural post-shutdown sailing.

On Saturday, Norwegian Gem became the first vessel to load and depart at Norwegian’s brand-new terminal in PortMiami, making her the first vessel in the line’s fleet to depart the firm’s home-city port in 17 months. She is the third of NCL’s 17 ships to resume operations, following Norwegian Jade’s inaugural sailing from Athens last month and Norwegian Encore’s departure from Seattle in early August.

Litigation between NCLH and the State of Florida is still under way. In an interview with Yahoo Finance on Monday, NCLH president and CEO Frank Del Rio gave a sharp critique of the American government response to COVID-19, with a particular emphasis on Florida’s approach.

“Can you imagine if 700,000 people in this country died of anything other than COVID, the outrage that there would be, what government would do to stop that?” he said. “And this government, whether we’re talking about local, state, or federal– and I’m not talking Republicans. I’m not talking Democrats. I’m talking about government. Our leadership has failed us. And so I’m not going to fail our customers. I’m not going to fail our crew.”

Del Rio characterized the State of Florida’s approach as “beyond bizarre” and “shameful.”

“Here is a state that relies on tourism as its number-one industry. And the number-one priority of any hospitality business is to keep their customers safe . . . And you would expect that government, again, would do everything possible to support that,” he said. “Instead, we had to go to court. And not only did we had– we went to court and we won . . . but now the state is appealing that ruling. They want to fight us again. I mean, come on. Give it up. This is a pandemic we’re talking about. People are dying every day.”