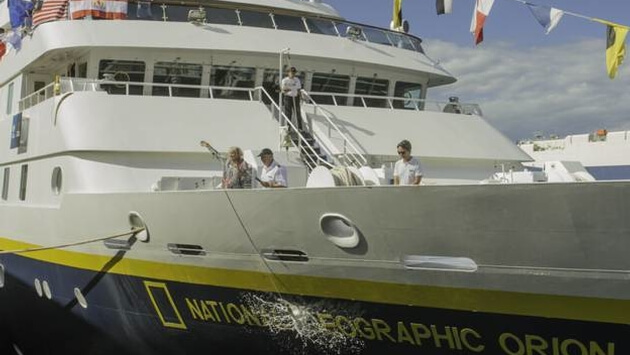 WHY IT RATES: Those looking for an adventurous new cruise destination will want to book one of these new Arctic itineraries. —Janeen Christoff, TravelPulse Senior Writer

Lindblad Expeditions-National Geographic has announced a program of voyages for 2019 that will venture into the Russian Arctic, one of the most rugged and wildlife-rich regions on the planet.

The three itineraries will give a different glimpse into life in the remote Russian Far East & Bering Sea, where spectacular wildlife, an intriguing native culture, arresting mysteries and world-class exploration history abound.

The human element is one of the richest aspects of visiting the Arctic, and this region is no exception. Communities of Siberian Yup’ik people still follow traditional methods of hunting seals and whales, while the coastal Koryak and Chukchi people of Russia have developed into incredible reindeer herders living off the land–and are a part of why few travelers leave this place unchanged.

Several members of Lindblad’s exemplary expedition team have spent time in the region and were integral to the development of the expeditions.

“I have visited the region since 2004 and immediately fell in love with its landscape, abundant wildlife and charming people of many cultures,” said Jen Martin, director of field staff and expedition development. “Over several years of travel there, the wildlife never became commonplace for me—it was spectacular every time.”

Across the Bering Sea

From Katmai to Kamchatka: Covering more than 3,800 nautical miles and nearly circumnavigating the Bering Sea, this is a wide-ranging voyage. Spot coastal brown bears from Katmai National Park to the Kamchatka Peninsula, search for Steller’s sea eagles along the scenically stunning Zhupanova River.

Be awed by the abundance and variety of marine mammals: Pacific walrus, northern fur seals, gray, humpback, and sperm whales, sea otters and Steller sea lions; and seabirds from the Aleutians to the Commander Islands including horned and tufted puffins, murres and rare whiskered auklets.

Visit a Koryak village in northern Kamchatka and Vitus Bering’s gravesite in the Commander Islands.

Life & Legend on the Bering Sea

Traverse the depth and breadth of the iconic Bering Strait and venture deep into the two distinct worlds it joins.

Encounter the remote culture of Provideniya, “the Gateway to the Arctic,” before exploring the Pribilof Islands, a naturalist’s paradise sometimes referred to as “the Galapagos of the North”–with the largest breeding rookery of northern fur seals, comprising about half the world’s population.

From those lively breeding grounds, continue on to explore the dynamic history, culture and natural wonders of the remote islands along Alaska’s rugged coast, including Kodiak Island with the native culture and Alutiiq people.

Explore Katmai National Park, one of the premier brown bear viewing areas in the world–with opportunities to witness them digging for clams at low tide and fishing for salmon, and a unique petrified forest to round out this immersive expedition.

This fascinating exploration of the remote Siberian coastline promises rich culture and an astounding wealth of wildlife.

Spend several days in this pristine landscape that’s home to the highest density of ancestral polar bear dens, the world’s largest population of Pacific walrus, and an astonishing variety of plant life.

Before this expedition comes to an end, witness one more site few get to see—an ancient, mysterious display of whale bones and skulls erected on Yttygran Island. Experience meaningful cultural exchanges across the entire breadth of Beringia.

The voyages are set aboard the 102-guest National Geographic Orion, a state-of-the-art expedition ship designed to safely explore the remote regions of the planet.

A modern, elegant ship, her stylish setting features a dramatic, window-lined main lounge and a library, where the expedition community gathers for cocktails and Recap, as well as expansive outdoor spaces. Everywhere you turn as you cruise, you’ll find panoramic windows that connect you with the wild world you’re exploring.

She is equipped with a full complement of cool tools to explore the environment, including kayaks, Zodiacs and a Remotely Operated Vehicle to explore the undersea.