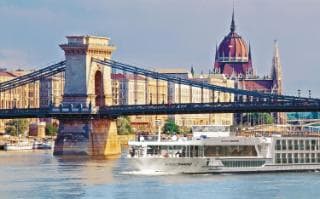 With everything from swimming pools, cinemas and cookery schools on river cruise boats, there is much to get excited about on the world’s rivers this year.

Almost all river ships these days offer a certain degree of luxury. But some provide more bells and whistles than others. Eschewing the trend for minimalism Uniworld River Cruises takes a confidently flamboyant approach to its interior design with plush drapes, wallpapers and soft furnishings and regency-style furniture and chandeliers decorating its rooms and public areas. On Joie de Vivre, a river boat launching on the Seine in March, fine art and antiques set the tone and in a nod to its French environs there is a ‘cave’ for wine-pairing dinners. Inclusive prices mean nothing extra to pay for drinks, excursions and tips.

For conventional luxury consider Crystal Cruises, a six-star line with two ocean-going ships. It is building two new craft to sail on the Rhine, Main and Danube in 2017. Crystal Bach and Crystal Mahler, launching June and August, have suites with French balconies that are attended by butlers and prices that include drinks, tips and a meal ashore in a Michelin-starred restaurant.

Belmond, which also owns the Cipriani Hotel in Venice, is launching two hotel barges on the canals and rivers of Alsace and Champagne in France this summer. Available for charter only, Belmond Lilas and Belmond Pivoine offer the ultimate in intimate with room for just eight people and itineraries that visit chateaux and vineyards.

AmaWaterways is opening river cruising up to families on AmaKristina, a new vessel launching in March. Sailing the Rhine, she has connecting doors in cabins so parents can keep an eye on the children and fares are lower for those under 18. Youngsters can cool off in a top-deck pool and borrow bikes for free.

For families who enjoy France, A-Rosa has free cruises for children aged two to 15, when sharing a cabin with an adult, on new voyages on the Seine. Sailing round-trip from Paris youngsters will learn how Richard the Lionheart’s castle in Les Andelys was stormed by the French and see the place in Rouen where Joan of Arc was burned at the stake.