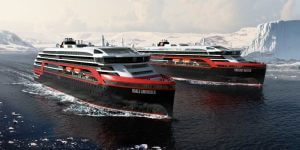 Hurtigruten has released what it calls “the most diverse and wide-ranging selection of expedition voyages in the company’s 125-year history”.

It will have three ships in Antarctica and five ships calling at Svalbard during the 2019-2020 season.

From the Northwest Passage and Franz Josef Land, via Svalbard and the Norwegian coastline, to the Galapagos Islands and Machu Picchu, the Norwegian cruise and ferry company says it is “strengthening its position as the world leader in exploration travel”.

It will be using its new ships to forge new itineraries, “setting a new global standard for exploration travel to the polar edges of the world – and to new frontiers,” said CEO Daniel Skjeldam.

Furthest ever north
Hurtigruten’s 2019-2020 program offers several new destinations, such as exploring the full Northwest Passage, following in the wake of polar explorer Roald Amundsen on board a hybrid-powered expedition ship named after him.

Another new sailing visits the wild and rarely-visited Franz Josef Land in Russia, well north of the 80th parallel – the furthest north that any Hurtigruten expedition vessel has ever operated.

The hybrid-powered MS Fridtjof Nansen will make voyages from Amsterdam to the Norwegian coast via Bjørnøya to Longyearbyen, Svalbard.

A further trip explores the highlights of the Norwegian coast including UNESCO-listed Geirangerfjord, the Lofoten Islands and “tiny fishing villages under the Midnight Sun” on the MS Roald Amundsen, embarking and disembarking in Hamburg.