Hurtigruten Leads the Way With Accelerated Return to Cruising 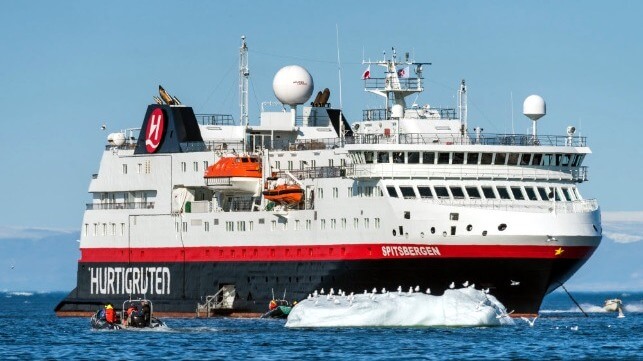 Shared from The Maritime Executive

While much of the focus on the cruise industry continues to be on the suspension and when and how cruising might return, Norwegian cruise operator Hurtigruten is accelerating its return to service. The cruise line plans to have 14 of its 16 cruise ships in service by the end of September.

In June, Hurtigruten became the first of the ocean-going cruise lines to resume cruises with four of its ships operating Norwegian coastal voyages between Bergen and Kirkenes. The company plans to add seven more ships to this route in August and September.

Hurtigruten also became the first cruise line to resume international cruise service when its vessel the Fridtjof Nansen sailed from Germany on the first of its 14-day cruises also along the Norwegian coast. Operating from Hamburg, passengers are currently only cruising along the Norwegian coast unable to land due to the travel restrictions, but the company plans to continue the voyages into September and believes that travel restrictions will be reduced permitting passengers to go ashore in Norway.

“As travel restrictions are lifted, we are now entering the next phase of our step by step return to full operation,” says Hurtigruten CEO Daniel Skjeldam. He notes that the initial cruises have received a strong response both from passengers and crew as well as in the local communities where they are stopping along the coast.

In the next phase of the return to cruising, Hurtigruten has announced that it will also offer a series of cruises sailing from the U.K. starting in September, possibly marking the first cruises available for U.K. travelers. The British isle cruises will commence aboard the Roald Amundsen, departing from Portsmouth (September 2), Liverpool (September 7 and 17), and Glasgow (September 12). Conscious of the concerns of travel in the  COVID-19 environment, they will be short expedition cruises that take guests to off-the-beaten-track destinations, such as Isles of Scilly, Fowey, Rathlin Island, Fortwilliam, Oban, Fishguard, and Waterford.

“We wanted to make sure guests can enjoy the British Isles like never before, visiting remote isles, seeing rugged nature and amazing wildlife, and enjoying charming coastal cities, towns, and villages while avoiding the mass tourism crowds,” Skjeldam said.

The cruises sailing from the U.K. are in addition to Arctic expedition cruising sailing from Norway starting in mid-July aboard the Roald Amundsen and Spitsbergen.

Aboard all of the cruises, the company has reduced guest capacity to allow for more social distancing, along with the introduction of strict hygiene protocols, health checks and screenings, that include temperature checks upon boarding and entry to restaurants.

The success of these cruises is being closely followed by the cruising industry and is viewed as a potential model for the larger ships as the cruise lines prepare for their return to service.