Exploring the Northwest Passage in the Footsteps of a Famous Explorer 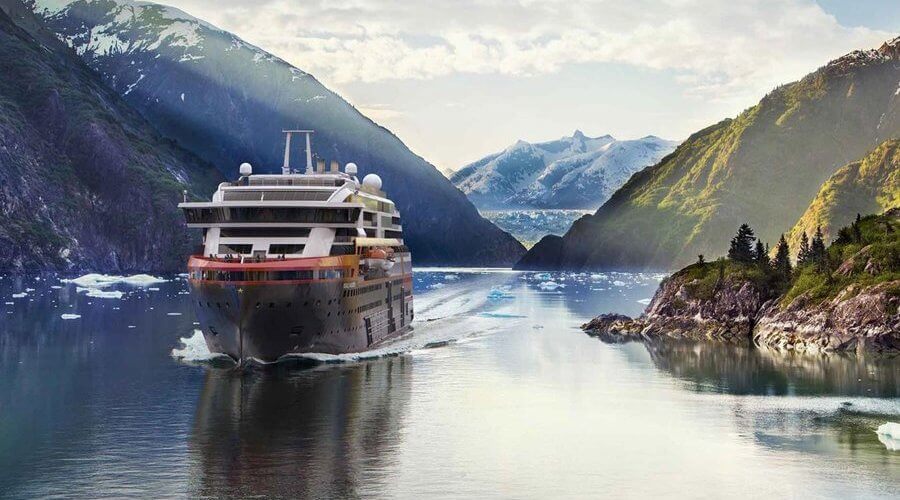 The abundant wildlife comes with a long history of exploration.By Brad Japhe on July 31, 2020

It was a frigid and fateful April afternoon just off the western coast of King William Island in the Arctic Archipelago. The year was 1848. Three years prior, Captain John Franklin of the British Royal Navy had led two ships—ominously named Terror and Erebus—through iceberg-addled waterways in hopes of discovering a new trade route to the Pacific. Obstruction had emerged about halfway through: an endless sea of fractured ice. It proved impassable. After some 18 months of waiting to wrest the vessels free from their frozen shackles the surviving crew abandoned hope. They ambled towards what they best figured was mainland, never to be seen or heard from again.

The tragedy isn’t exactly travel brochure material. But the sorts of travelers allured by the Northwest Passage aren’t usually compelled by cookie-cutter holidays. No, the objects of their affection are rugged adventures; regions of dizzying remoteness. In the past, there has always been grave danger inherent to such environments—as evidenced by many doomed explorers throughout history. Today, thankfully, the convergence of modern technology and well-equipped touring companies affords us not just safe, but comfortable access.

Even with global temperatures several degrees higher than in the days of Franklin, there still remains a narrow window when exploration is possible each year. Adventure Canada—an independently-owned cruise-liner—operates two annual journeys therein aboard its Ocean Endeavour. Into The Northwest Passage embarks out of Kangerlussuaq, Greenland in the middle of August and takes 17 days to reach Kugluktuk (close to Nunavut’s border with the Northwest Territories in the Canadian Arctic). Out of the Northwest Passage reverses that itinerary at the beginning of September.

During the journey you can expect to see plenty of polar bears in their natural habitat. You’ll cruise past the Ilulissat Icefjord, a UNESCO World Heritage Site that is the primary iceberg factory for the entire North Atlantic. Perhaps you’ll have an opportunity to marvel at almost-mythical wonders: narwhals, beluga whales, the aurora—to name a few. But you’ll definitely encounter a daunting degree of history along the way.

The most stark relic for many visitors are the graves at Beechey Island. They contain the known remains of members of the Franklin Expedition. But the cultural significance, even of this seemingly barren stretch of land, extends far beyond resting place for these hapless English explorers. “The sod huts of the Thule people—predecessors of today’s Inuit—are also there for all to see, very nearly as intact as when they were built hundreds of years ago,” explains Aaron Spitzer, a historian who frequently works aboard Adventure Canada expeditions.

“The Northwest Passage has long been a portal between the east and the west,” he adds. “It is thought that the Inuit moved from Alaska—their original homeland—to northern Canada and Greenland by way of the passage sometime around 800 years ago. It has been the site of gold rushes, whaling booms, and even cat-and-mouse games between the Soviets and the West during the Cold War. Relics from all of these times still pepper the passage; when you sail through it feels as if the past is still quite present.”

It certainly helps that the extreme temperatures here have a way of eerily preserving things. Indeed, when the Erebus and Terror were finally found in 2014 and 2016, respectively, a trove of in-tact remnants and personal belongings were recovered, resting just 35 feet below the surface of Victoria Strait. Thanks to an exclusive partnership with Parks Canada, guests aboard the Ocean Endeavour last year were able to cruise to the archeological site on zodiacs. Hovering above the wreckage, they looked-on as divers brought up artifacts retrieved from the vessel.

Getting back to nature, the serene beauty of this far flung corner of the globe is impossible to overstate. As senior vice president of expeditions for Silversea Cruises, Conrad Combrink has drifted across every ocean on earth. Yet few places capture his imagination to the same degree. “Navigating the passage’s chilly waters during the brief summer thaw is nothing short of legendary,” he contends. “This journey is the very definition of deeper travel; Northwest Passage voyages are by far the rarest travel routes on the planet.”

He’s particularly fond of a lonely, uninhabited crag jutting off the southeastern shores of Baffin Island. It is named in honor of Captain Franklin’s widow. “The geology of the island is striking with vertical cliffs of Archean rocks, likely to be some of the oldest stone in Canada,” Combrink observes. “The waters around Lady Franklin Island offer an abundance seabirds, ducks, seals, and walrus. With a bit of luck it is possible to see Atlantic Puffins here and perhaps even a rare Sabine’s Gull.”

But if you’re fortunate enough to trek to this extreme corner of the globe the lasting impact may not be owed to what you see so much as who you meet. For all its well-published past, the Northwest Passage remains home to a culture rooted in the here and now—resilient natives whose families have lived here for nearly a thousand years.

“It’s truly a beautiful and amazing place,” says Osborne. “Communities like Gjoa Haven, Pond Inlet, and Grise Fiord are spectacular spots and the people there are so warm and welcoming. It is one place that should be on everybody’s bucket list.” But unlike those ill-fated adventurers of yore, it won’t have to be the last place on that list.