Exploring the Most Beautiful Islands on the Face of the Earth 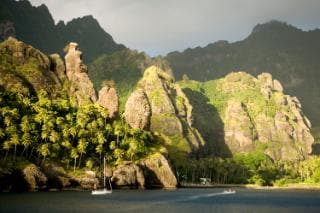 The island was as round as a calamari ring. An idyllic oval of palm trees haloed by snow-white sand. Black-tip reef sharks streaked through the shallows as we docked. “Ever tried clams?” asked Tino, one of the crew, grinning from behind large, black sunglasses.

“I’ll show you how to catch them,” he said, handing me a mask and snorkel. We waded into the warm shallows. “Look,” he instructed. “See them? Poke the hook into the corner while she’s open, wait for it to clamp shut, and then tug gently.” I pushed my face beneath the surface and slipped the metal between the lips, swirled blue-and-green like carnival lipstick. After several yanks it came free and I held aloft the stick with primeval glee. Tino coaxed it open with a knife, carved out the entrails, added a squeeze of lime, and offered it to me on the pearlescent plate. I slurped it down, seawater dribbling down my chin.

We were on Takapoto, the first port of call on the Aranui V, which had sailed out of Papeete harbour the previous day. Part-cargo ship part-cruise liner, she delivers cement, cars, sugar and tourists to the Marquesas. A French-protectorate archipelago that, on a map, appears as little more than toast crumbs sprinkled in the middle of Polynesia: a triangle of the vast Pacific Ocean, with Hawaii, Easter Island and New Zealand forming its three outermost points.

Her dozen ancient volcanoes, half of which are inhabited, are one of the most remote clusters of islands in the world. So isolated, in fact, they have their own time zone thirty minutes ahead of Polynesian capital Tahiti.

With careful planning most sailings were done overnight, so we could enjoy as much of the islands as possible during the day. Only two full days were spent at sea and during those, the crew offered lectures on everything from Polynesian history to traditional dance.

With a reputation for being “the most beautiful islands on the face of the Earth” (Paul Theroux), it will probably come as no surprise to find that their remoteness has attracted an alumni of writers and adventurers. Theroux toured the islands in 1991 – on an earlier version of the Aranui no less – while researching The Happy Isles of Oceania.