Digging the deep-dish and architecture on Chicago tour 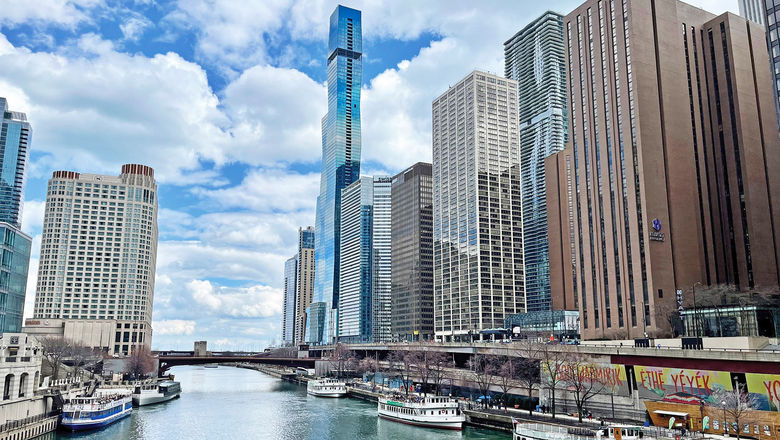 While most cruisers might not realize they can start or end cruises in Chicago, American Queen Voyages has staked its claim on the city as a homeport for both its river and Great Lakes ships.

In fact, American Queen is the only major river cruise operator with cruises that launch from the Windy City, with a nine-day Chicago (Ottawa, Ill.) to St. Louis (Alton, Ill.) and reverse itinerary on the Illinois and Mississippi rivers. The sailing, on the American Countess, kicks off with a precruise hotel stay in Chicago and offers guests the chance to add on a three-day City Stay Package that includes accommodations at the Sheraton Grand, a driving tour of Chicago and additional sightseeing opportunities.

The company transports passengers 80 miles to Ottawa, where they board the ship on the Illinois River.

After spending a few days in Chicago this spring, I’d suggest anyone — especially a first-timer to the city, like me — who is about to set off on a river cruise start the week with a day on another river, the Chicago River, taking one of the city’s famed architecture tours.

First Lady Cruises offers an open-air escape in the heart of the bucket-list city with a number of cruises, including one of its most popular: the Chicago Architecture Foundation Center River Cruise.

Now in its 29th year running on Chicago’s First Lady ships, the foundation’s river cruises take guests on a tour through the city’s past and present by offering a unique perspective on the history behind the famous skyline. 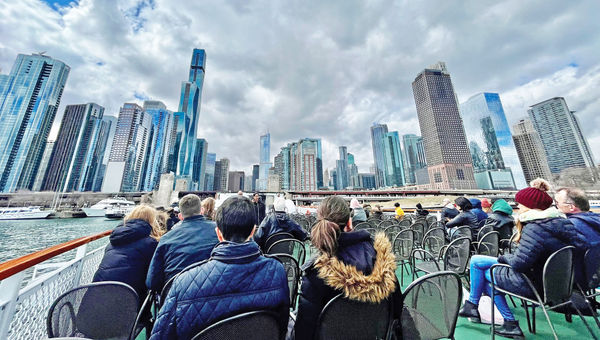 Guests take in the Chicago skyline from one of First Lady Cruises’ ships. Photo Credit: TW Photo by Nicole Edenedo

“You see, really, how architecture styles have changed throughout time,” said Alice Danielle, one of the docents who lead Architecture Foundation tours. “You’ve got the Beaux Arts-style London House, the contemporary style of the St. Regis — we go through all of those times. Buildings were designed with what people were living with at the time. That’s what I think you see: As Chicago changes, the buildings change.”

The architecture tours go beyond just explaining how the buildings got their shapes. For instance, a common motif seen across the rooftops of the city’s skyscrapers are water towers, and the story behind their prevalence dates back to a major turning point in Chicago’s history that has influenced the city’s modern infrastructure.

“The Chicago Fire was devastating. It destroyed the entire city,” she said. “We had the toughest fireproofing laws [after that]. There were no wooden buildings allowed after that.”

Bob Agra, CEO of Chicago’s First Lady, said the knowledge that its guides can share is what sets these river cruises apart from others.

“If you’re into architecture, you can come get a college-level lecture about all the different styles, the different buildings, their history, different architects and all the firms that have developed these engineering marvels,” Agra said.

And, he said, what sets apart Chicago from a city like New York is that on a New York river tour, “you only get to see the outside of it. You don’t really breach into the city and go through it, like you do in Chicago. We’re so fortunate that Chicago has this unique feature, in that the river really runs through it.” 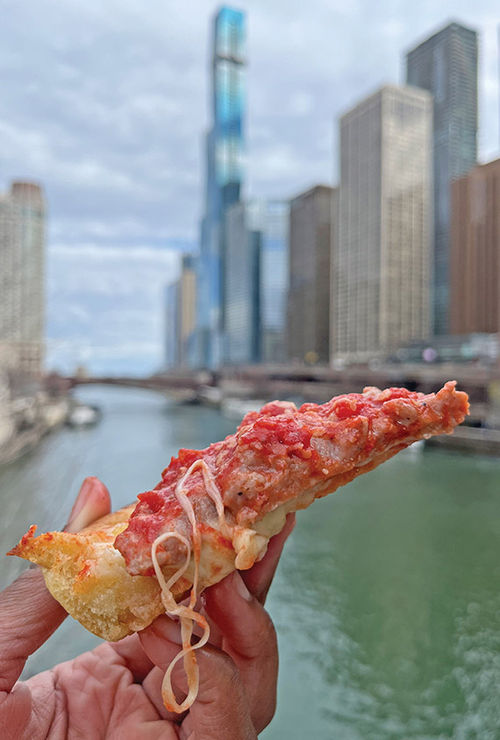 Once those 90 minutes are up, it’s as good a time as any to check off another must-do Chicago experience: Find the nearest joint for deep-dish pizza. Luckily, the locally revered Lou Malnati’s is within walking distance of the Chicago Riverwalk where the First Lady fleet docks, located inside the historical Wrigley Building.

Being my first encounter with the city, I opted for a classic Chicago-style personal pan pie. As a New Yorker, I was a bit dismayed by the fact that I couldn’t grab a single slice at Malnati’s, but one bite and I was glad to have three more hot slices still in the box.

A few steps outside of Malnati’s puts you back on Michigan Avenue, overlooking the river from the DuSable Bridge, where I had yet another chance to enjoy the river, this time with my first Chicago-style pizza.