Caffeine, Culture, Quetzals and a New Day for Panama 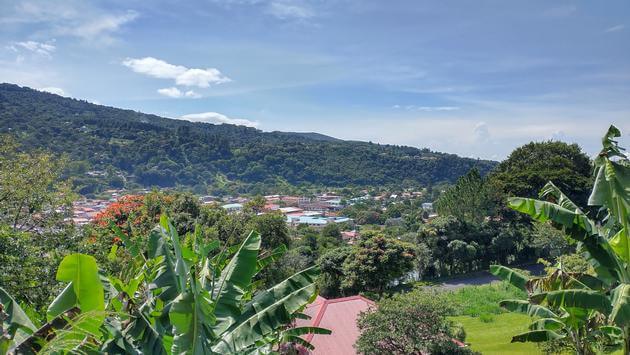 The western Panamanian province of Chiriqui (chi-ree-KEY) is home to a 10,000-foot active volcano, the world’s largest binational protected reserve, Central America’s most peaceful and conflict-free rural tourism experience, and the world’s most expensive coffee.

In addition, Chiriqui welcomes travel agents and their customers to rethink the Central American visitor experience.

Panama tourism currently is hitting a new stride. Often used as a connecting point for Americans bouncing into South America, (Tocumen International Airport gets some sixteen million annual passenger arrivals), Panama is encouraging longer stays for “discerning” travelers. A marketing and branding initiative (launched in October of 2021) wants us to “Live for More” and embrace:

“A land radiating with life, perfectly imperfect, and full of authenticity. Where Northern and Southern worlds connect, old and new worlds coexist, and cosmopolitan landscapes live in harmony with wild, untamed rainforests.”

Chiriqui is but one of several provinces that highlights Panama’s main draw: extraordinary diversity in a ridiculously small space. The s-shaped isthmus we call Panama is about the size of South Carolina, yet its biodiversity outranks that of the US, Canada, and Europe combined. While the wonder of the Canal and Panama City (the most modern city in Latin America) still see the most visitation, Western Panama’s frontier with Costa Rica will amaze both seasoned and novice off-the-path explorers alike.

Visitors arrive via a 40-minute flight from Tecomen International Airport to the city of David, David being the province’s capital and a nexus for travelers heading between San Jose (Costa Rica) and Panama City. David is about agricultural commerce, higher education, and middle-class prosperity. Visitors can choose to head south toward the Pacific coastal town of Boca Chica and two national parks, but most will want to climb to the highlands (north) to embrace cooler temperatures and an Eden-like environment of rural towns, rivers (20), orchid farms, coffee fincas (farms), and one of Latin America’s most popular retirement living destinations.

Head north from David and you’ll reach Chiriqui’s highlands. A web of independent indigenous cultures lived here when Spaniards arrived in the early 16th century. Cultural genocide followed, and today the region’s sole remaining people are the Ngobe-Bugle. The cool and verdant countryside north of David still bears the mark of 19th century European and North American immigrants. And now, a wave of “lifestyle migration” is making its mark.

Agrotourism is a growing cottage industry, in towns like Guadalupe, Volcan and Cerro Punta. The setting is reminiscent of the Swiss countryside: gushing rivers, manicured pastures, dairy farms, strawberry fields, flowers, order, and prosperity. Idyllic for a Central American region that is rife with conflict and despair, this area is a pastoral paradise. It is well worth one’s time to explore places like the Finca Dracula, an oasis for orchids (over 2,000 species!), and serene walking trails. Nearby is the tranquil riverside Hotel Casa Grande Bambito.

This area is on the western side of the Baru Volcano (Panama’s tallest). It is the gateway to two stellar outdoor adventures: the Parque Internacional La Amistad (World Heritage since 1990 and home to over 600 bird species) and the Sendero de los Quetzales. This trail runs along the northern flank of Volcan Baru. Quetzal sightings are most frequent from December to April (dryer months). It’s a remarkable hiking corridor (go accompanied and expect to spend a full 6-8 hours) that leads to a trailhead near the town of Boquete. So, walking between these two popular areas is a possibility for even casual hikers in fit condition.

The town of Boquete (40 miles due north of David) is a bonanza of rural Central American pleasures. “Discovered” by AARP and commercialized as a retirement wonderland for North Americans, Boquete sits in a river-divided valley surrounded by verdant farms, coffee plantations, fields of citrus, eco-adventure parks, sophisticated dining/lodging, and a Shangri-La ambiance. In my 40 years of traveling Latin America, I have never seen anything like it.

Home to some 25,000 (including several thousand US, Canadian and European retirees), Boquete sits in the shadow of Volcan Baru. The summit can be reached hiking via an arduous “road” strewn with boulders and gullies. Or one can take a 4-wheel drive ascent to the summit and watch the sunrise/sunset over the Atlantic and Pacific. The Sendero del Quetzal descends from Punto Cerro (to the west), with the trailhead a few kilometers from the Boquete town center.

Boquete’s rich volcanic soil, abundance of water and the guiding hands of European and North American farmers have crafted a city that defies most Latin America stereotypes. Coffee (including small farms growing the world’s most expensive beans) and overseas living has brought gentrification, land clearing and price inflation. But since the road from David stops at Boquete’s northern flank, there are no passers-by, few day visitors (weekends and holidays, yes) and no snarling traffic. Uber clean, free of distracting signage and visual chaos, as opposed to many areas in Mexico), and without any sign of shanty squatters, Boquete is a place to inhale cool tropical mountain air, (although it does rain almost daily May to December), while sipping a local microbrew or the area’s world-renowned coffee.

The Hotel Panamonte belongs in an earlier era. Built just after Canal completion in 1914, its simple cottages (16) are spacious and beautifully appointed. White picket fences and flower gardens set the tone. It is where Canal-based US Army brass would go on romantic escapes and has hosted the likes of Richard Nixon and Ingrid Bergman. The restaurant is excellent and there will be culinary classes once again in 2022. Also, investigate the Hacienda Los Molinos Boutique Hotel for modern luxury, a jaw-dropping setting, and fine resort amenities.

Spend days exploring this single main street town, and a main plaza uncharacteristically free of stone churches or colonial mansions. Eat Brazilian Pizza (who knew?), and Asian, Argentine and Peruvian fair. Take a nap. Hike to a coffee finca. Eat like a serious foodie at The Rock. Soak your bones at a hot spring. River raft. Write a blog. Reflect.

Or as one new slogan tells us, “Live for more.”

Agents take note, you won’t find US tour operators packaging this region. It’s an itinerary of “get to the city of David, rent a car and jump from coast to volcanic calderas.” Give the region a full 4-6 days for an unforgettable Central American eye-opener.

You can become a Panama Specialist at Travel Agent Academy here.