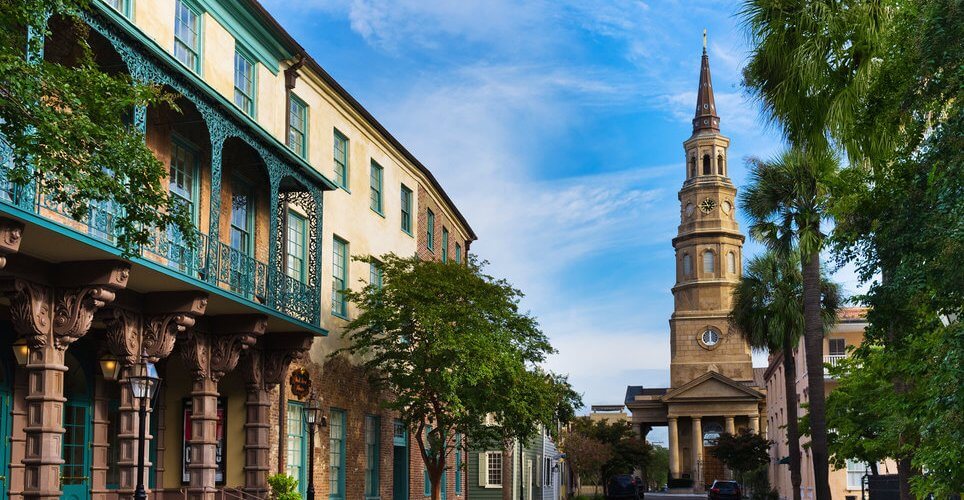 With the international travel ban barring Americans from visiting many of their favorite overseas hotspots, travelers might be feeling a little stuck. But many domestic destinations have a very foreign feel you can venture to right now. From an English countryside retreat just outside of Chicago to a historic city oozing with London charm, here are U.S. getaways that feel like European cities.

In its infancy, Charleston had the reputation of being a “Little London”, with a busy seaport welcoming ships from Europe that carried various European staples and luxuries. Defined by its rich history, cobblestone streets, and pre-Civil-War-era architecture, the Holy City, provides an exciting and sophisticated getaway that emanates old-world European charm. Travelers can take advantage of luxury accommodations in Charleston’s downtown Historic District’s heart at the city’s best boutique properties, including The Spectator Hotel, HarbourView Inn, and French Quarter Inn.

As a much younger country than Europe, American is not known for its castles and old country estates. But if you head just outside of Chicago, you’ll find a hidden England-like retreat. Established in 1929, the 57-room Deer Path Inn is located in one of the country’s wealthiest zip codes and is reminiscent of a Tudor manor home located in the English countryside. Considered a respite for Chicago city dwellers and out of towners, the inn is known for its spacious accommodations and exceptional dining offerings. Get elevated European Cuisine and white-glove service in The English Room and traditional bangers and mash in The White Hart Pub.

While most known for skiing, Vail is a year-round wonderland steeped in Bavarian culture (like its annual Oktoberfest celebration). It’s also characterized by classic Bavarian architecture, seen in the farmhouse-style hotels, bars, shops, and restaurants throughout. The village is reminiscent of the Bavarian alpine town of Garmisch-Partenkirchen, which boasts picturesque cobblestone streets, mirror-like alpine lakes, delicious cuisine and more. For luxurious accommodations, visitors can stay at one of Exclusive Resorts’ 10 private vacation residences within the Arrabelle at Vail Square. They feature private gourmet kitchens, spacious living rooms with fireplaces, views of the pedestrian plaza, and ice rink below and direct access to the Eagle Bahn gondola.

With its culture, cuisine, and architecture heavily influenced by Spanish Colonial settlers, walking through New Orleans’ French Quarter is reminiscent of walking through Spain’s streets. With Original Travel, a tailor-made itinerary company, travelers will have the opportunity to explore New Orleans’ Spanish influences by way of a specialized itinerary curated to fit their specific needs, requests, and interests. From watching jazz at Preservation Hall and enjoying the classic French 75 at Hotel Monteleone to sampling some of the Big Easy’s delicious cuisine, Original Travel can arrange any New Orleans getaway. After you’ll know why New Orleans was once called “Spanish Louisiana.”

Known for its 400 miles of navigable canals and waterways, Cape Coral gives you that city-on-the-water feel without venturing to Italy. Plus, you get the bonus of also getting a beachy getaway. As far as where to stay, The Westin Cape Coral Resort at Marina Village is tucked away in the prestigious Tarpon Point Marina and beloved for its boat-on and boat-off ease. Overlooking the Gulf of Mexico, San Carlos Bay, and the Caloosahatchee River, the resort offers secluded adventures from private fishing charters to kayaks and paddleboards for guests to experience its canals rich with marine life.