America’s Small Cruise Ships Will Sail to Alaska in 2021 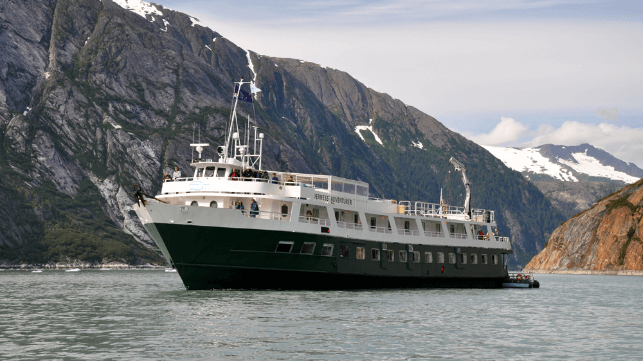 America’s small cruise ship industry will be operational in Alaska in 2021 despite what they are terming the devastating decision by Canada to bar large cruise ships and recommend against cruise travel. The repercussions of Canada’s decision hit far beyond the large cruise companies into Alaska’s towns and small businesses that depend on revenue from cruise passengers. For that reason, talk is also beginning to possibly waive U.S. regulations that would prevent large cruise ships from reaching Alaska before 2022.

“Alaska here we come,” says Dan Blanchard, CEO of UnCruise Adventures and a leader of the coalition of small cruise ship operators. “It is a resounding yes we can operate,” said Blanchard highlighting that his company and peers sail American flagged vessels manned with American crews. The company’s cruise ships will be able to transit Canadian waters under longstanding treaties between Canada and the United States.

While Blanchard is pleased to be able to offer his cruise programs and expects peers including Alaska Dream Cruises, American Cruise Line, and Lindblad, to also be sailing in Alaska this summer, as an Alaskan native he was emotional about the impact of Canada’s policies on the small businesses of his home state. “There are mouths to feed,” he said pointing out that many of these businesses survive on revenues from the tourists and are now facing two years without the visitors the large cruise ships bring to Alaska. Before the pandemic, well over one million cruise passengers a year visited Alaska, and even with the restrictions, the expectation was that 2021 would bring a significant number of tourists to the state.

Blanchard highlights the pent-up demand with many people anxious to travel and the fact that his company and the industry has learned a lot over the past year. In 2020, UnCruise aborted their cruise season when one passenger reportedly tested positive three days into the first cruise. The test results later turned out to be an error.

For 2021, UnCruise will have six of the company’s seven U.S. flagged cruise ships sailing in Alaska starting from Juneau on May 16. The seventh ship is being held in reserve and is available if demand warrants it. Blanchard highlights better availability of mobile testing kits and a program of triple testing as UnCruise’s frontline strategy to “keep the virus off our boats.” As an adventure cruise line, he also highlights that passengers are off the ships each day in small groups as well as the ability to do things such as social distancing on hikes. Aboard, they will require masks in public spaces and social distancing, but he says they also learned from 2020 that it is possible to do contract tracing and that passengers generally stayed in their small groups aboard. If a case is suspected, the passenger can quickly be tested multiple times and UnCruise has made arrangements so that the passenger could be isolated onshore.

Speaking for the industry and his home state, Blanchard said they were simply devastated by the news, which “shook the industry to its boots.” Because of the vital role tourism plays in the Alaskan economy, Blanchard said he would support a temporary wavier of the Passenger Vessel Services Act (PVSA), which traces its origins to 1886 and was later incorporated into the Jones Act preventing foreign flag passenger ships, including today’s modern cruise ships, from carrying Americans between U.S. ports without a visit to a more distance foreign port.

“UnCruise would support a short-term, four-to-six-month, exemption to the act,” said Blanchard provided the cruise lines paid appropriate taxes because of the importance of the large ships to Alaska’s small businesses. He views the possibility that large cruise ships could sail from Seattle and make a technical call in Canada to meet the requirements as unlikely, so he said he would share his view with the small ship operators that they should permit a temporary waiver for the good of Alaska. However, he doubts the U.S. Congress can act quickly enough or has the political support to pass a wavier in time to save the 2021 cruise season.

The large cruise ships, he points out are still waiting for details from the Centers for Disease Control to fill out the framework designed to resume cruise operations. Blanchard estimates it would take 110 to 120 days to reactive a large cruise ship and without the CDC’s guidance, and now a waiver to the PVSA, he fears the window is closing for the large ships to operate in Alaska this season.