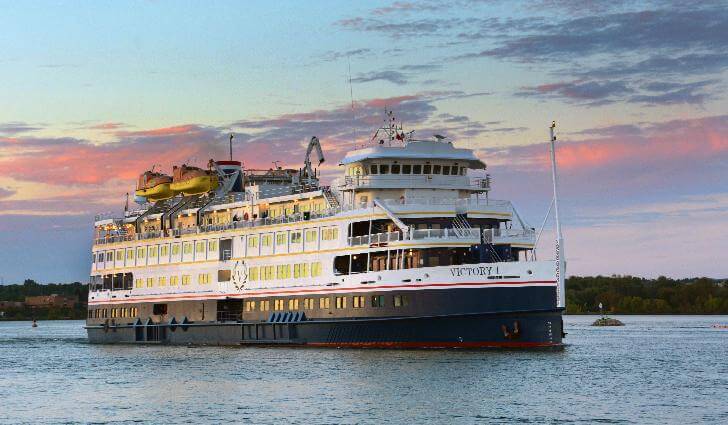 American Queen Steamboat Company, in a surprise move, announced a definitive agreement to acquire Victory Cruises Lines, as well as the Victory I and Victory II sister oceangoing and coastal cruise ships (pictured above) from Sunstone Ships, Inc. Terms of the transaction are not being disclosed and the deal is expected to close in early January 2019.

“We are pleased to purchase the Victory I and Victory II, which will fuel the continued success and growth of American Queen Steamboat Company,” said John Waggoner, chairman and CEO of American Queen. “We look forward to working closely with Victory Cruise Line’s new and existing travel partners. These vessels enable us to provide guests with more diverse cruising options particularly in the Great Lakes, a region that our customers have been requesting for years.”

The 5,000-ton, 300-foot-long, 202-guest Victory I and Victory II are both identical and details of upcoming operations on both of vessels will be announced in the coming months. Victory already features cruises of the Great Lakes, coastal U.S. cruises and Cuba cruises. It was planning to launch cruises of the Yucatan in January.

Until now American Queen had offered only paddlewheeler river cruise boats sailing the Upper and Lower Mississippi, Ohio and Tennessee rivers, as well as the Columbia and Snake rivers in the Pacific Northwest. The company had indicated it might start cruises of the Great Lakes, but had not announced final plans to do so until now with the Victory ships.  Miami-based Victory the Victory I and Victory II, ships, and has a new build 180-passenger vessel, the Ocean Victory, on order for 2021.

Hans Lagerweij, Victory’s president and CEO, said his company has established itself as the leading cruise line on the Great Lakes and  bookings for 2019 are already 35 percent ahead of 2018. “American Queen’s established and strong product and brand is well-suited to take the Victory vessels and Victory Cruise Line brand forward, creating one of the largest North American Great Lakes and U.S. river cruising companies in the country,” he said.

American Queen did not reveal whether Lagerweij would continue to oversee the Victory brand, not did it describe the future duties, if any, of cruise industry veteran Bruce Nierenberg, Victory’s founder and chairman. Ted Sykes, American Queen’s president and chief operating officer, last month said he would leave the company at the end of the year. American Queen also did not indicate whether Victory ships would continue to cruise multiple ports in Cuba or a new sailing of the Yucatan, an itinerary that was supposed begin in January.

Both American Queen and Victory had recently been actively affiliating with travel agency consortia, including Ensemble, Signature and TravelSavers.