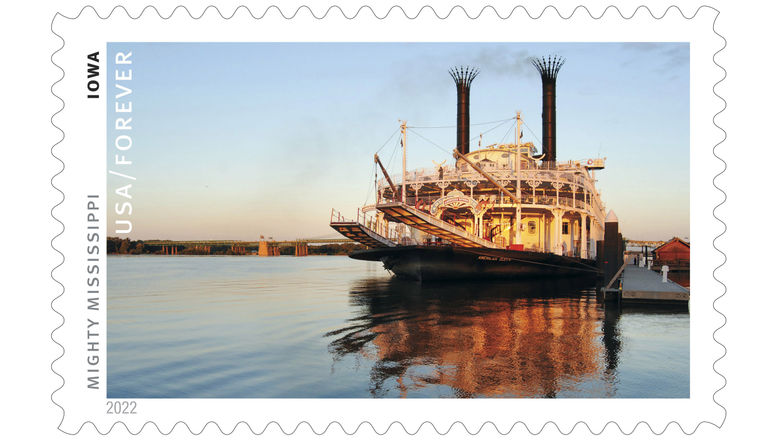 The Postal Service has released a new collection of Forever Ever stamps to commemorate the “mighty Mississippi,” and the company’s flagship vessel, American Queen, is featured on one of the stamps.

The Mighty Mississippi collection features 10 photographs representing the states along the course of the waterway. The American Queen steamboat appears on the Iowa stamp in a photograph taken by David Sebben in 2015 while the ship was docked in Bettendorf. The city is located along the route of domestic luxury cruise line’s upper Mississippi itineraries that visit cities from just outside of Minneapolis to St. Louis.

“Our flagship American Queen is an iconic symbol of those mighty paddle-wheelers, and we are honored to have her grace the collection,” said John Waggoner, founder and chairman of American Queen Voyages, at the stamp collection’s day-of-issue ceremony at the Beale Street Landing in Memphis, Tenn.

The Mighty Mississippi Forever Stamps are being sold in panes of 10, and customers can order through the U.S. Postal Store web store, by calling 844-737-782 or by ordering by mail through USA Philatelic or at post office locations nationwide.