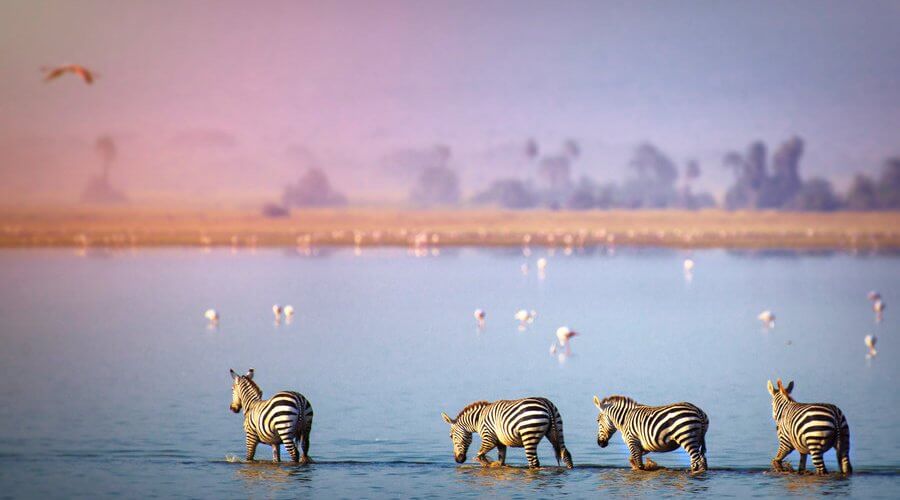 From the Kalahari to Sabi Sand Reserve, here’s your chance to glimpse the Big Five in real-time, in your pajamas. By Tal Dekel-Daks on March 31, 2020

As the global population sits at a standstill to try and stem the spread of coronavirus, more and more people are looking for ways to entertain themselves beyond their Netflix queue. Enter: virtual entertainment. There’s now a virtual escape for every type of interest, from virtual tours of museums and castles to livestreams of operas, musicals, and even stunning hotel views. And if you love wildlife adventures, you’re in luck.

African safaris are stepping up digitally to bring the sights and sounds of a safari experience to the comfort of your home. So home-bound adventurers can experience the thrill of a bucket-list safari trip as game reserves and lodges, such as andBeyond Ngala, Singita Sabi Sand, and Tswalu Kalahari are taking their luxury safaris online through live streams, interactive game drives, and live Q&As hosted by researchers on the ground.

On top of that, several game reserves offer round-the-clock live footage of key wildlife hotspots through webcams connected to Africam and Explore.org allowing anyone to pop in for a view at any time of the day and scout the savannah for the Big Five.

So while we may not be able to hop into a Land Cruiser and go on a safari adventure right this moment, check out our list below of the top virtual safari experiences for spotting big cats, rhinos, and lions in real-time from the comfort of your couch.

Nature lovers can tune into three-hour long live safaris every sunrise and sunset in April from andBeyond’s Ngala Private Game Reserve,​​​​​​ which shares unfenced borders with the famed Kruger National Park, and Djuma Private Game Reserve, in Sabi Sand Reserve. The game drives are hosted by expert andBeyond and WildEarth field guides and will follow the sights and sounds of the African wilderness as they unfold.

Lions, large rhino bulls and tiny baby elephants are just some of the wildlife resident photographer and safari guide Ross Cooper encounters on his live drives through the Singita Sabi Sand concession in South Africa. To go on a live game drive with Cooper, follow Singita on Instagram at @Singita_  where the team on the ground goes live at least twice a day.

Go on a live game drive with Singita here.

The Tswalu Kalahari Reserve is South Africa’s largest private game reserve and one of the best places in southern Africa to see cheetah in the wild. Tune into Tswalu’s Instagram and Facebook pages on Thursdays to see the area’s researchers post live videos and Q&As. The first live Q&A is scheduled for Thursday, April 2 with Wendy Panaino, a PhD pangolin researcher of the Tswalu Foundation.

Tune into the Kalahari each Thursday here.

On the Northern border of South Africa and Botswana lies the spectacular Tau Game Lodge in the Madikwe Game Reserve (the fourth largest game reserve in the country). This lodge overlooks Tau Waterhole, an oasis for animals and wildlife including elephants, giraffes, lions, zebras, and cheetahs. The 24-hour Tau live camera gives viewers a secret window into this sanctuary and it’s robust South African ecosystem as elephants bathe, lions roar, wild dogs roam, and crocodiles prey.

Take in Balule Nature Reserve’s watering hole from a leopard’s eye view. This live camera has been set up at the same height as the big cats that frequent it, making for a unique perspective. According to Explore.org, you’re likely to spot wildlife here ranging from curious cheetahs and lions to Egyptian geese, meerkats, waterbuck, and porcupines.

Both Africam and Explore.org have live webcams set up at Tembe Elephant Park, a watering hole near the border of South Africa and Mozambique known for having the largest elephants in the world—in abundance. Even when the largest visitors don’t amble by, the stream is still worth a look—you might see tiny suni antelopes, or hear the chirping sounds of one of several hundred species of birds.

And remember to practice ethical safari ways even when tuning in virtually. Refrain from sharing photos of rhino locations online. They’re sadly in a constant threat of poaching in South Africa.