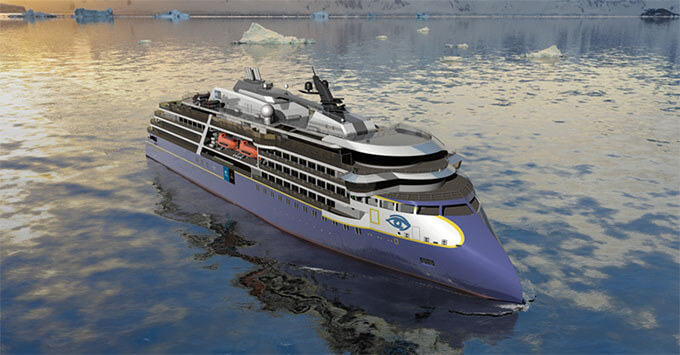 (9:50 a.m.) — Lindblad Expeditions, a small-ship adventure cruise line, has signed an agreement with Norwegian shipbuilder Ulstein to build an expedition ship specifically designed for the polar region. It will be the first polar-specific new-build for Lindblad and is scheduled to launch 2020.

The ship will focus on exploration of the polar regions, through the use of kayaks, cross-country skis, a remotely operated vehicle (ROV), hydrophones (for listening to underwater noise), a video microscope, underwater video cameras, a helicopter landing platform and an innovative Zodiac loading system for easy loading and unloading of Zodiacs.

Among the 69 cabins, 75 percent of them will feature balconies, multiple observation decks inside and outside, and new “observation wings” — all designed to maximize views.

Twelve cabins onboard will be specifically designed for solo travelers. A spa and fitness area will include treatment rooms, saunas, a fitness room, a relaxation area and yoga room. There also will be two infinity Jacuzzis.

Dining options will include a main restaurant — with a view, of course — and an outdoor barbecue and bistro eatery.

The ship will have a high ice class to it can go deeper into the polar regions that some other polar ships, as well as expanded fuel and water tanks for extended operations in remote areas. Zero-speed stabilizers help ensure stability, particularly when it’s stopped for wildlife viewing or for when getting onto or off of the ship.

“The launch of this ship will mark the 50th anniversary year of the first-ever purpose-built expedition ship, Lindblad Explorer, which was built by my father, Lars-Eric Lindblad, and will set another important milestone in the company’s commitment to deliver expedition travel at its best,” said Sven Lindblad, president and CEO of Lindblad.

The ship will be built in Ulsteinvik, Norway, and is schedule for delivery in the first quarter of 2020. Lindblad debuted its first-ever new-build this year and has a second coming in 2018. It has an option with Ulstein for two additional ships.

Lindblad is the fourth expedition cruise line to recently announce a new-build specifically designed for sailing in the polar regions. Other new polar ships are coming from Hurtigruten and Quark in 2018 and Antarctica XXI in 2019.