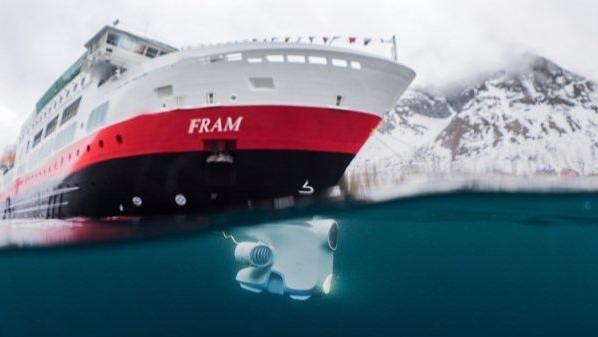 Hurtigruten cruise line introduces a new way to see what lurks beneath the world’s most remote polar waters. On its expedition ships, the company is introducing an underwater drone that streams real-time video of orcas, leopard sharks, penguins and other creatures beneath the water.

The Norwegian-based company recently announced plans to bring along a Blueye Pioneer, a 15-pound robotic device with a video camera adapted for low light and power thrusters to keep it moving.

The drone zips beneath the surface of the water and streams images back to screens aboard the ships. Or passengers can wear masks with digital displays that may make them feel like they’re on a dive deep in the ocean

Hurtigruten plans to start by outfitting two hybrid-powered ships — the Roald Amundsen and the Fridtjof Nansen — with the new underwater drone.

“[W]ith underwater drones on our ships we can take our guests to areas less explored than the surface of Mars,” company Chief Executive Daniel Skjeldam said in a statement.

The company sails to places such as Antarctica, the Northwest Passage, Arctic Canada, Greenland, Svalbard and the Norwegian coast.